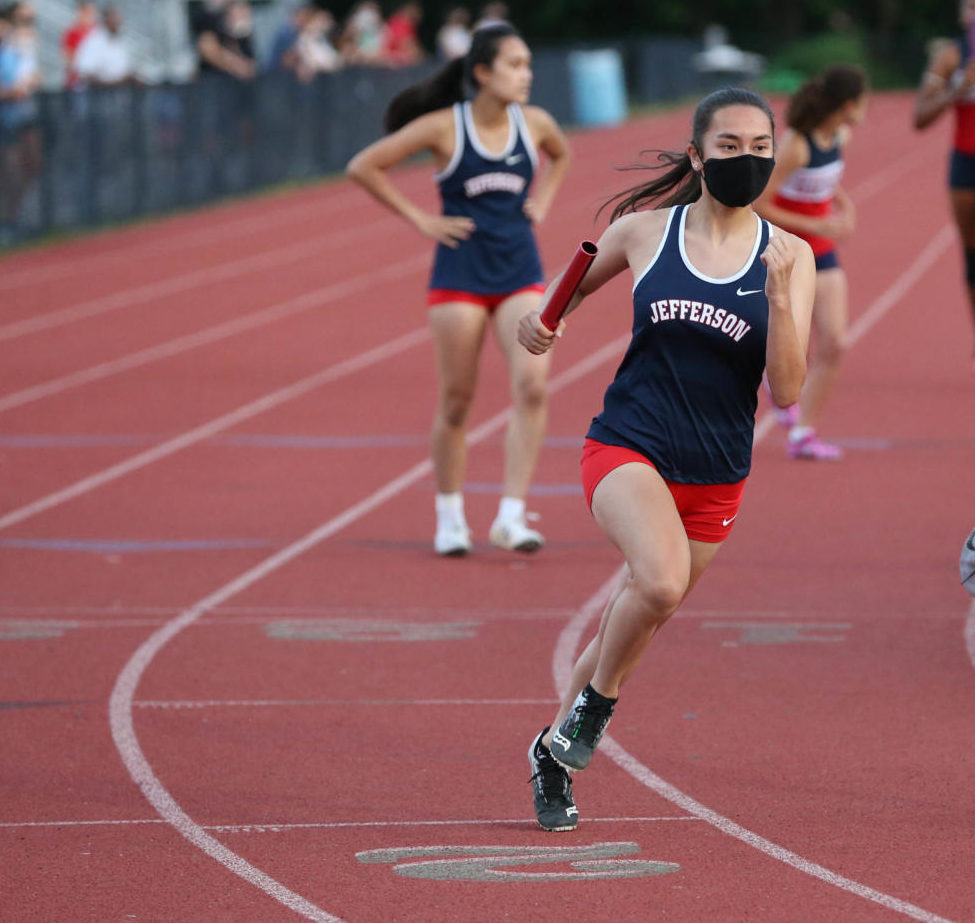 Junior Aurora Richard races on day two at district track meet and field meet in 2021. Richard began track planning on it being an off-season sport to maintain fitness, but fostered a unique love of track and continued it for the rest of high school. “I love the feeling of sprinting,” Richard said. “Especially this time of season when it starts getting cold. It’s really refreshing.” (Arnold Sowa)

Junior Aurora Richard races on day two at district track meet and field meet in 2021. Richard began track planning on it being an off-season sport to maintain fitness, but fostered a unique love of track and continued it for the rest of high school. “I love the feeling of sprinting,” Richard said. “Especially this time of season when it starts getting cold. It’s really refreshing.”

The crisp autumn air. Cheering crowds. Early mornings before the sun has risen. Hours of stretching, warming up, and prepping. Everything has led to this moment.

“Ready,” the umpire’s voice echoes through a megaphone. “Set.”

A high pitched beep sounds out.

Junior Aurora Richard lives for the rush of pushing her feet off the ground and sprinting down the track as fast as she can. With nothing to focus on but her technique and the cool air of upcoming winter, track has helped her in more ways than one. This year, she has begun private lessons outside of the indoor and outdoor track seasons.

“I hope to get recruited,” Richard said. “I want to go to a college that has a major that I’m interested in, but my second priority is if they have a good track team. I’ve always hoped that I would pursue a sport in college, whether it be on a D1 or D3 recruited, intramural, or club sport.”

Fostering a love of track

Richard’s journey began as a child. She always knew she would do a sport in high school, but what she didn’t know was that the sport would become her main source of serotonin, stress-relief, and motivation.

“Because of my older brothers I was always an athletic kid,” Richard said. “I always thought that I would do track in the winter and play soccer in the spring like them. But I started my freshman year with winter track and I really liked it and all the people that I met, [so] I decided to continue doing it in the spring.”

Today, track has become more than just a sport for Richard. After about two hours of practice a day for two seasons a year, track is a fundamental part of her life.

“I love the feeling of sprinting, especially this time of the season when it starts getting cold,” Richard said. “It’s nostalgic. I really enjoy being outside—the fresh air and the crisp sharpness in my lungs is really refreshing. I don’t really think of anything when I’m running. It clears my head.”

After graduating, Richard hopes to continue her track career in college.

“My brothers got recruited for soccer in college, and I really liked how they’ve kept their friends and formed really strong bonds and relationships because of their sports,” Richard said. “I want that, too.”

However, due to the demanding nature of getting recruited for college, Richard has begun private training outside of the season.

“I’m trying to run in college, so I have to take track more seriously. I have to train harder,” Richard said. “I still enjoy it, but I need to get certain times and there’s a very strict performance that’s required of me to be able to run in college.”

During the season, track practices are five days a week with a meet every weekend. In addition to this, Richard has been doing private training to improve her times before the winter track season begins.

“I did some training during the summer by myself, but it’s really hard to get the right workouts and know that they’re actually benefiting you without more knowledge and experience like a trainer,” Richard said. “I fixed my diet and my sleep schedule over the summer.”

After realizing she needed a trainer to help her plan her workouts and get enough motivation, Richard hired one and began to train even more rigorously during the fall.

“Every day I do a track or gym workout,” Richard said. “One day a week I do nothing, which I think of as recovering so I can get ready for the next week of training.”

She meets with her trainer every Sunday and has already begun to see her times decrease with the extra training.

“Having a trainer who gives me workouts and will help me with the admission process, recruitment, and college offers has been really beneficial,” Richard said. “I already think I’ve started dropping my times and correcting my running form a lot.”