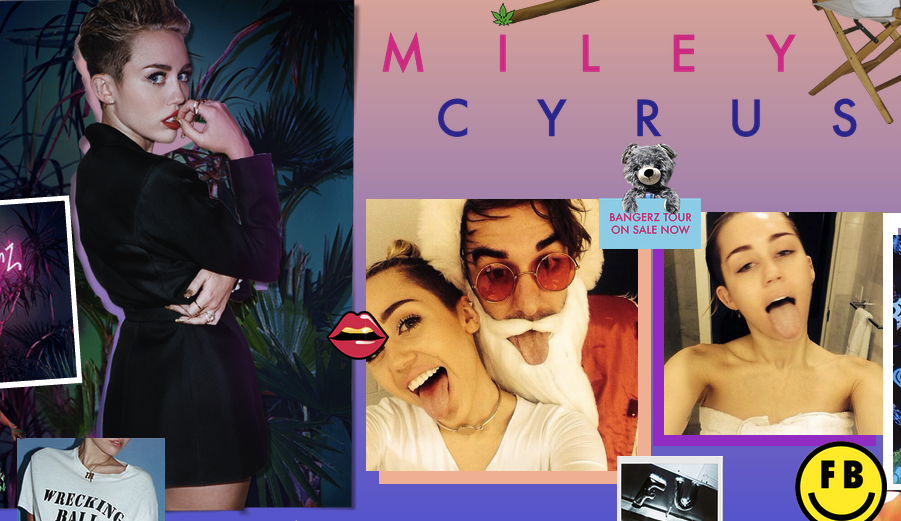 I often find myself thinking about the fads of today and saying to myself “Why did this even get so popular?” Something about what the nation likes and dislikes is completely unpredictable. So at the end of 2013, we can look back on those trends which seem to have gone popular overnight; yet no one knows why. Here are the most overexposed trends of 2013.

The award for ‘Most Overexposed’ goes to:

1. Miley Cyrus
This year, Cyrus totally transformed herself from Disney’s innocent pop star, Hannah Montana, into a girl desperate for attention. From her risque performance at the Video Music Awards to the release of her video for “Wrecking Ball,” she gained the popularity she so desired.

I believe the country has better things to do than watch a former child star go down the path to self destruction, as we saw with child actors Lindsay Lohan and Macaulay Culkin. However, I can see Cyrus’ point of view. No one had given her a second glance before 2013, and now she’s talked about by almost everyone. Unfortunately for Cyrus, twerking on Robin Thicke while surrounded by gigantic dancing bears isn’t exactly what most people consider to be classy.

2. Harlem Shake
This dance craze definitely has overstayed its welcome this year. The fad was an excuse for normal people to act like buffoons for about 30 seconds, without being called out on it. In the short videos, made by groups ranging from business offices to prisoners to bands such as One Direction, one person out of the group would begin to dance wildly to Baauer’s “Harlem Shake,” while the others milled about. As the beat of the song dropped, the rest of the group would explode in erratic dancing. The Harlem Shake seemed ‘different’ and ‘fresh’ while it was popular, around April and May of this year. In hindsight, the videos were just like any other dance craze, similar to 2012’s “Gangnam Style” or 2009’s “Teach Me How to Dougie.”

3. The Cup Song
“I got my ticket for the long way ‘round-” the long way surfing through Youtube before I could find a music video that wasn’t a cover of Anna Kendrick’s “Cup Song,” from the popular film “Pitch Perfect,” that is. After watching Kendrick master this beat made entirely out of the act of tapping a plastic cup on a table, nearly everyone had to have a go at it. In the original film, Kendrick, playing a college student Beca, performed this song while auditioning for an a cappella group called “The Barden Bellas.” Although Kendrick’s famous tune was pleasant to the ear for the first 70 times it was heard, after that it became overdone and frankly, kind of annoying.

5. Vine
The challenge was to make a meaningful video in six seconds. However, this may be one trend which will last into the coming months of 2014, since the company has not yet shown signs of a decline in popularity. I’ve always considered Vine to be the go-to social media website for “effective procrastinators,” or those who like to watch an hour of funny videos online, yet are efficient about it because of the number of Vines they are able to watch in that time.

6. Rainbow Loom bracelets
These little trinkets have been deemed Silly Bandz’ new little cousin, hitting the stores nearly everywhere this year and becoming the latest trend in preteen fashion. Sold in kits which contain packets of small colored rubber bands, the buyer is able to make the design they wish with the bands, ranging from simple to intricate and complex designs. Just like the Silly Bandz phase, I predict that this fad won’t last.

7. “The Fox,” by Ylvis
No one actually knows what the fox says, but they now can assume the small, furry animal makes sounds that range from a screaming male to a dying whale thanks to Ylvis’ hit song, “The Fox.” Matched with a music video viewed 310 million times on Youtube alone, the song definitely made an impression on pop culture this year. But the odd thing is, no one knows why the video garnered so much attention. In fact, business offices, schools and even clothing manufacturers like Abercrombie & Fitch have even made covers of the bizarre tune while adding their own personal twist.

8. Twerking
I cannot express how tired I am of twerking. twerking in Vines, twerking during the Video Music Awards, the term “twerking” has now made its way into almost everyone’s vocabulary. Twerking, or the act of repeatedly shaking one’s behind, is another dance craze of the year that will be looked upon badly in the coming years, as we ask ourselves why it became so popular in the first place. Will this fad soon come to an end? I sure hope so.

9. Galaxy Pants
Throughout 2013, the galaxy print has made its way on to leggings, t-shirts, backpacks, and even sneakers. Teens have gone wild about this relatively simple print, made with speckles of white in a black and purple background. I did like this pattern on clothes and shoes, but only in moderation. The pattern can be tasteful if paired with basic articles of clothing. Yet, as the season of fashion changes, so will teen fads.

10. Lady Gaga vs. Katy Perry
In 2013, Lady Gaga has made herself synonymous with words like “edgy” and “bold,” while Pop Star Katy Perry continues to be considered “fun” and “sweet” by many. This year, a whole new rivalry between the stars emerged as the singers released their new songs within the same week or so in August.

The nation quickly began to compare the two artists, taking sides as to which one they preferred best. The hit show “Glee” on Fox even did an episode in which cast members chose which artist matched their personality best, adding fuel to the fire that put the two musicians head to head. I do not think it is right to put the artists in comparison, because both have different, but not opposite, musical styles. Gaga’s ability to take fashion risks is admirable. Katy Perry also took a remarkable risk this year with the release of “Prism,” her latest album which contained the hit song “Roar.”

11. Royal Baby
Once again, here is a prime example of a baby who is already more popular than I will ever be. Only slightly after the birth of North West, Duchess of Cambridge Kate Middleton gave birth to George, the now prince of Cambridge in July. As predicted, we all fell head-over-heels in love with the idea of a new royal and future heart throb, even going as far as to create computerized images of what George may look like as a young teenager. I am excited about the new royal as well, I predict this is one fad which may not die out for a long time.

12. Amanda Bynes
2013, the year Amanda Bynes became yet another washed up child star. Formerly known for her roles in the early 2000’s hit show “All That and the Amanda Show,” as well as “What I Like about You,” Bynes used to be just another happy kid on television. This year, Bynes managed to offend a handful of celebrities such as Drake and Miley Cyrus by insulting them via Twitter, as well as check into rehab for drug abuse. With the latest news about her splattered all over the tabloids, Bynes got the attention she wanted.

13. Sprouse Twins
I can officially deem 2013 as “The Year of the Reappearing Child Stars,” after former Disney stars Dylan and Cole Sprouse also made it back into the media’s eye. Currently attending New York University, Dylan Sprouse had sexted a former girlfriend who leaked nearly nude photographs of the former “Suite Life of Zack and Cody” star across the web. The nation was quick to judge Dylan Sprouse, however the star handled the situation remarkably well, owning up to the photographs and explaining why he took them.