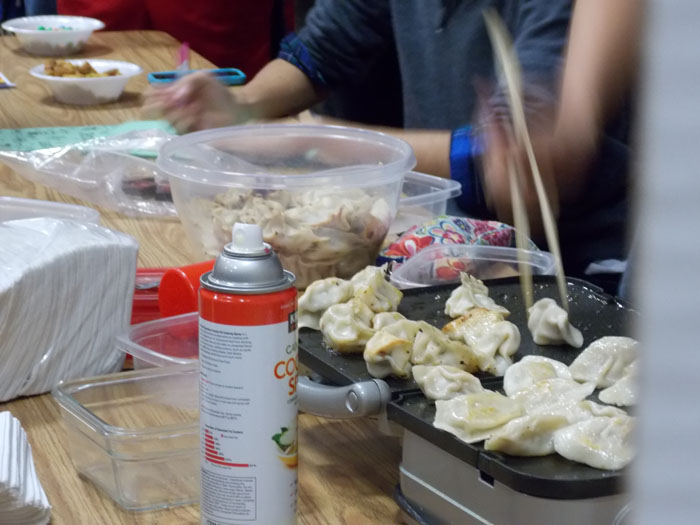 On Wednesday, Dec. 18, during both blocks of eighth period, the Language Department held a winter festival that highlighted cultural aspects of each language. There was food for the students to enjoy as well as many games for them to participate in.

There were five languages represented at the party: Chinese, Spanish, French, Latin and Japanese. Each had their own food mostly specific to their culture and fun games to go along with them.

The Chinese table handed out dumplings and had an enjoyable chopstick game. The Spanish table decided to take a healthy approach to food and gave out grapes to the students. Cream puffs were handed out by the French table and students were also given the incentive of getting more cream puffs if they played the games they had prepared. The Latin table gave out Swedish fish in celebration of Saturnalia, the Latin Christmas celebration. The Japanese table gave out sushi as well as provided small games for students.

“I thought it was really interesting to see all the different cultures being represented and I especially liked the Japanese exhibit because they had yummy sushi and a fun game,” sophomore Victoria Yang said

Yang was just one of about 100 kids that attended the Language Winter Festival and many of them really enjoyed the food provided more than anything.

“Although I really enjoyed learning about how different cultures celebrate their winter festivals, my favorite part was definitely eating all the different and delicious food,” sophomore Reema Patel said.