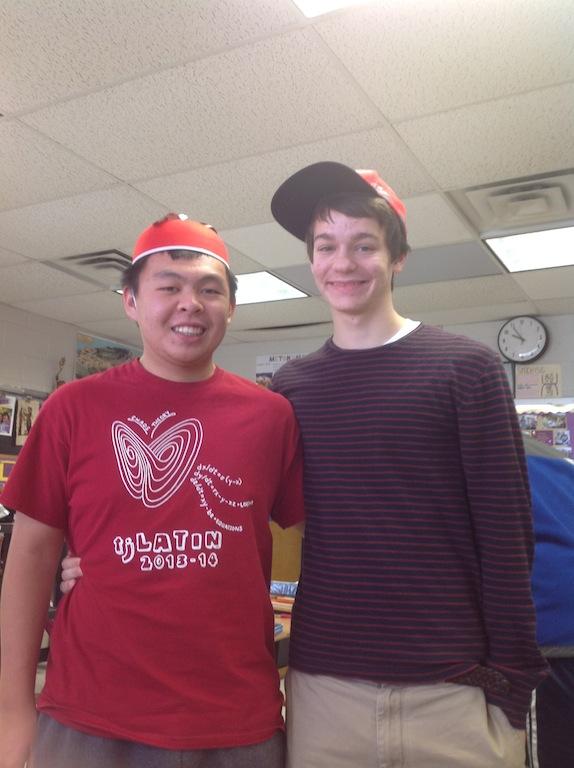 Juniors George Ho and Jack Morris show off the gifts they received for Saturnalia.

Saturnalia, a festival held around the winter solstice, was celebrated by the Ancient Romans to honor Saturn, the god of the harvest. However, this is no longer 100 CE.

In order to bring back the traditions of the Romans, the Latin program at Jefferson holds a Saturnalia festival across the Latin levels every year in mid-December. The festival is held to celebrate Roman culture, as well as to extend the appreciation of the Latin language and study of the Roman civilization.

Held on Dec. 18 this year, students of every level of Latin celebrated Saturnalia by bringing in a food dish to share and exchanging gifts. They were assigned to their own “Secret Saturnalia,” who was another member of the class, and anonymously gave them a present, as well as write a poem about their Latin name or the gift they were receiving.

“I got my Secret Saturnalia person some bookmarks with horses on them, because I know she loves horseback riding, and a necklace,” sophomore Ashley Kim said.

The Saturnalia festival was originally celebrated around the winter solstice along with Christmas so that the Christians in Rome could celebrate alongside the Pagan Romans without fear of Christian persecution during ancient times. The festival asks the God Saturn to bring back the bountiful harvest in the spring, so there would be a surplus of food during the next year.

The presents exchanged between students during class included gag gifts, such as a beanie hat or a plastic lobster, which was a gift given to a student in the class who had a sense of humor. Other gifts included nail polish, chocolates and warm winter socks.

The Latin program is also planning to host an event during eighth period on Dec. 20 to celebrate the Roman festival. During the period, the program plans to hold a “Saturnalia Cinema,” in which students can come and watch movies about Greece and Rome.

“My favorite part of Saturnalia this year was the gift exchange,” Kim said. “Some of the gifts were so thoughtful and nice.”