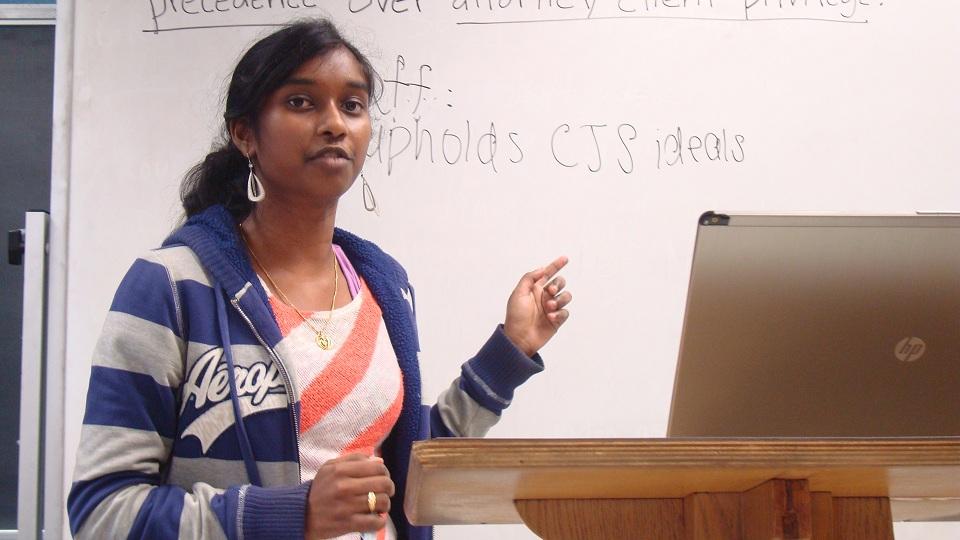 Junior Sraavya Poonuganti teaches members of the Lincoln-Douglas Debate team as the teaching coordinator and prepares them for tournaments.

On Dec. 14, all debate and speech teams at Jefferson vied for victory in the third tournament of the Washington-Arlington Catholic Forensic League (WACFL) competitions at Lake Braddock Secondary School.

The teams, Public Forum, Policy and Lincoln-Douglas Debates as well as Speech participated in the all-day competition that lasted longer than eight hours. Numerous students in all grade levels joined the tournament to refine their oratory skills and be qualified for the Metrofinals tournaments in February and March.

“To prepare for WACFL 3, I practiced with two other Jefferson friends at Panera and shared useful information,” sophomore Christine Li, a member of Policy Debate, said.

Members of the debate teams competed with students from different schools, including Broad Run, Oakton and Dominion high schools while the speech members were able to participate in a wide range of competitions, such as Declamation and Dramatic Performance.

Different topics were assigned for each debate teams as they contrasted dramatically in their overall characteristic and personality. While the Lincoln-Douglas team debated the legitimacy of the United States criminal justice system by incorporating philosophical ideas, the Public Forum team debated the pros and cons of the National Security Agency (NSA).  In addition, the Policy debate members shared their thoughts on whether the United States government should broaden the economic interaction with the Latin American countries.

“My favorite part of debate is the feeling I get after I finish a speech,” senior Jamie Kim, the teaching coordinator of Policy debate team, said. “It feels like a hundred pounds has been lifted off my shoulders.”

Kim hopes that the novice debate members will gain an invaluable experience from the WACFL competitions as they polish their skills to advance to the junior varsity divisions.

“I hope my novice debaters learn the importance of teamwork,” Kim said.

Junior Sraavya Poonuganti, the teaching coordinator of Lincoln-Douglas who helped many debaters to prepare for WACFL 3, felt that debate would help her develop numerous beneficial traits through the open sharing of thoughts and opinions.

“Through Lincoln-Douglas, I am hoping to gain more confidence in myself not just as a speaker, but as a person,” Poonuganti said. “Over the years, Lincoln-Douglas has made me more comfortable with taking risks.”