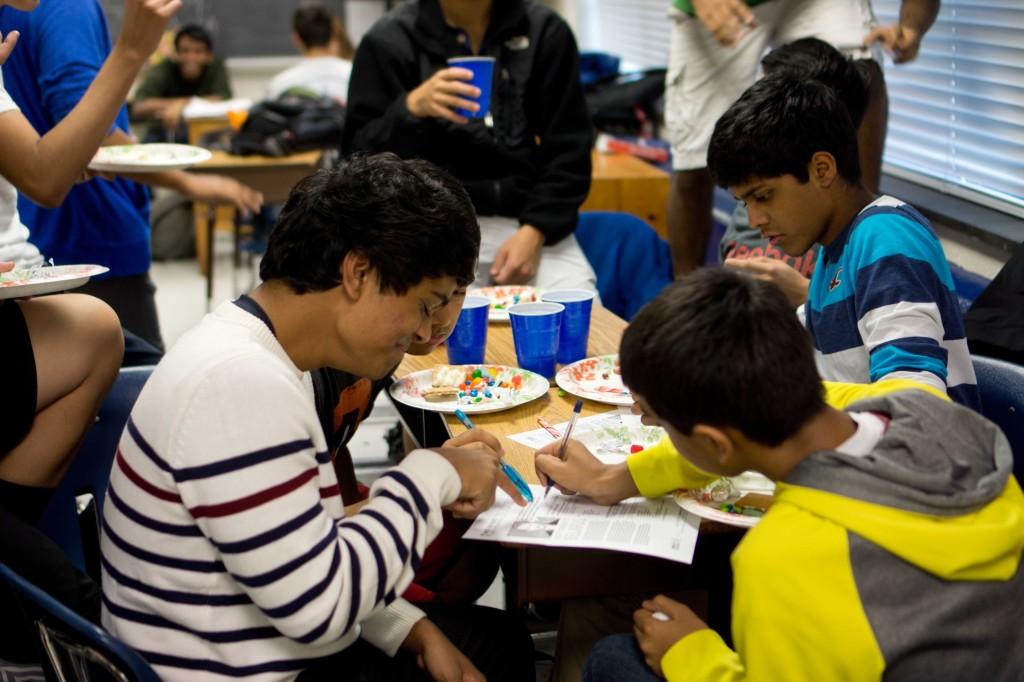 Sophomores Srikar Kosuri, Pranav Gulati and Haran Chithranjan contribute to the Write for Rights campaign while enjoying some holiday treats.

The scribbling pens and snacking students seemed to be part of just another one of the cheerful events that Jefferson eighth period clubs hold as the holidays approach. However, behind the lighthearted atmosphere at Amnesty International’s eighth period session was a campaign for a much higher purpose

The Write for Rights movement for 2013 runs from Dec. 2 to Dec. 17, which includes International Human Rights Day on Dec. 10. Each year, the organization distributes cases in which the rights of certain individuals have been falsely violated. Chapters and individuals alike who are involved with the organization then participate in a letter-writing campaign to “stand in solidarity with those suffering human rights abuses,” according to Amnesty International’s website.

“We provide cases where people have been taken prisoner for a violation for their humans rights,” senior Chris Haseler, the club’s vice president, said. “In this event, our goal is to see how many letters we can write collectively as a club.”

This year, Jefferson’s chapter tackled four cases. These cases include an Ethiopian journalist who was detained for his support of free speech, an Egyptian woman who was violently attacked for participating in a peaceful protest, a Cambodian activist who was arrested without legitimate evidence in a suspected attempt to hinder her housing rights campaign and a Chinese filmmaker who was imprisoned and tortured due to his work on a controversial piece.

After letters are written by each chapter, they are sent to the international organization. According to Haseler, the club at Jefferson wrote just over 200 letters for the cause last year, contributing to the 1.5 million letters that were written in total.

At the end of the letter-writing campaign, Amnesty International will send the letters to leaders of countries that have improperly detained citizens. Haseler hopes that the barrage of letters from millions of voices around the world will spark a positive response from these leaders.

“I think it’s wonderful that we’re all writing letters to help an international cause,” sophomore Sruthi Kodali said. “Everyone should have human rights, and even if one person can’t make a difference, together we all can.”