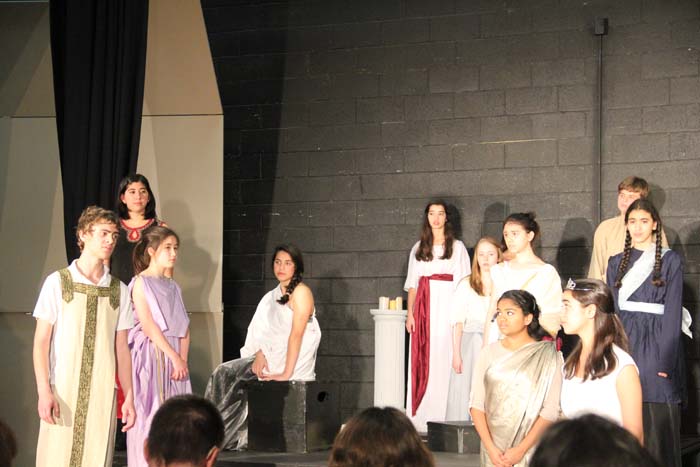 Students prepare for "Dido and Aeneas" during dress rehearsal

Beautiful notes filled the auditorium as captivated students sat in chairs on the front of the stage.On Friday, Dec. 6, Jefferson Choir performed the opera “Dido and Aeneas” during eighth period B-Block and after school. The open dress rehearsal was after school on Thursday.

“Dido and Aeneas” is the tragedy of the ancient Greek lovers Dido, queen of Carthage, and Aeneas, the Trojan hero. The story begins with Dido in love with Aeneas but fearing that he would be a weak ruler, however they do eventually get married. Later, they are separated by the evil sorceress disguised as Mercury, and Dido dies of heartbreak. Seniors Hannah Pho and Asa Kaplan played the female and male leads, Dido and Aeneas respectively.“Dido and Aeneas” is a Baroque opera that was originally written for an all-girls school. The show is 40 minutes long, so it could be performed during eighth period.

Jefferson Choir decided to do an opera this year because it would be a different experience than what their shows typically entail. An opera requires performers to act while singing throughout the show, as well as to hit more difficult notes.

“We wanted to keep with the theme of really dramatic musicals, like last year with ‘Sweeney Todd,’ but it’s also a really good learning experience to sing opera,” senior Olivia Sullivan said. “You have to act out the scenes and make it interesting for the audience, but also learn how to sing difficult solo parts.”

Most students who attended the play appreciated the vocal ability and musical talent of the singers and musicians the most.

“The singers and musicians were great. I liked how we were seated on stage, and the performance itself was spectacular,” sophomore Rushi Shah said.