The hills are not alive in “The Sound of Music” 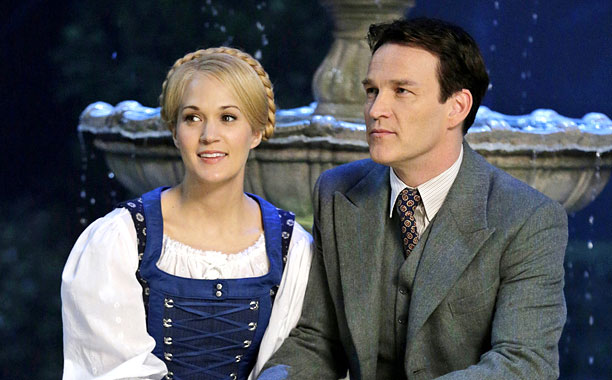 Carrie Underwood and Stephen Moyer as Maria and Captain von Trapp in NBC's "The Sound of Music."

There are musicals, and then there are popular musicals. And then, there is “The Sound of Music,” a musical so beloved by people worldwide because of its message of a family which comes together during the Nazi Party’s conquest of Europe, and the power of music to bring love and happiness in even the most terrible of situations.

Before I had turned two years old, my mother had introduced me to the 174-minute film adaptation the musical is known best for. The 1965 movie starred Julie Andrews in the lead role of Maria, a friendly and confident nun who is sent to be a governess for the seven children of the von Trapp family and falls in love with the widower head of the family, Captain Georg von Trapp. I, like millions of people who had watched the film before me, fell in love with Andrews’ charm and angelic voice and wanted desperately to be like the eldest von Trapp child, Liesl, when I grew up.

So naturally, when NBC announced that they would be producing a one-take-only, live version of the stage musical, I was ecstatic. And then I found out Carrie Underwood would be playing Maria.

Don’t get me wrong, I don’t hate Underwood at all. In fact, I’m a huge fan of her music and followed her journey on “American Idol” religiously. I think she’s absolutely darling and classy, and a role model for young girls everywhere. But she’s not Maria. While I commend her for having the guts to take on such a role, especially when it would be broadcasted to a live audience of millions, it wasn’t the right role for her.

Underwood is not an actress by trade. She’s a singer, and a fine one, but she didn’t live up to expectations in singing nor acting. Underwood didn’t know how to use her talented voice in character—rather than using her head voice to sing the lovely melodies of “My Favoring Things” and “Edelweiss,” she belted. To be frankly honest, at some points the hills weren’t just alive with the sound of music—they were screaming, belting even the highest notes. Perhaps it was impressive, but it wasn’t Maria. Not to mention, Underwood’s acting was sub-par, and it was clear that she didn’t know how to respond to other characters, making it difficult for audience members to connect with her.

Stephen Moyer fared better than Underwood as the stern Captain von Trapp, but he fell short at times as well. Rather than looking stoic, he looked clenched. Moyer’s voice was satisfactory, and his best performance was in “Edelweiss.” Michael Campayno and Ariane Rinehardt were good as Rolf and Liesl, and their pas de deux and chemistry were excellent, the abbey scene being of particular note. I will admit though, that I missed the rainy gazebo date where Liesl had her first kiss from the movie—the woods behind the von Trapp residence is not so romantic, and neither are Rolf’s ridiculously high shorts.

The best performances, however, came from the Broadway veterans, which is no surprise. Audra McDonald as the majestic Mother Abbess stole the show with her rendition of “Climb Ev’ry Mountain,” which moved Underwood to tears. Christian Borle as Max and Laura Benanti as the Baroness were simply perfection, the duo proving just how musicals should be done. Their comedic timing was impeccable, Benanti brought a whole new dimension to the Baroness, and Borle seemed to be the only one who had a genuine reaction to the Nazis. The children were adorable, particularly Payton Ella as the youngest child, Gretl.

I’m impressed with the decision to broadcast a live musical, but the production fell short on too many occasions. From the unnecessary belting to the strange costumes to the poor casting choices, NBC’s version of “The Sound of Music” is definitely not one of my favorite things.