Juniors go on enlightening trip to museums in Washington, D.C. 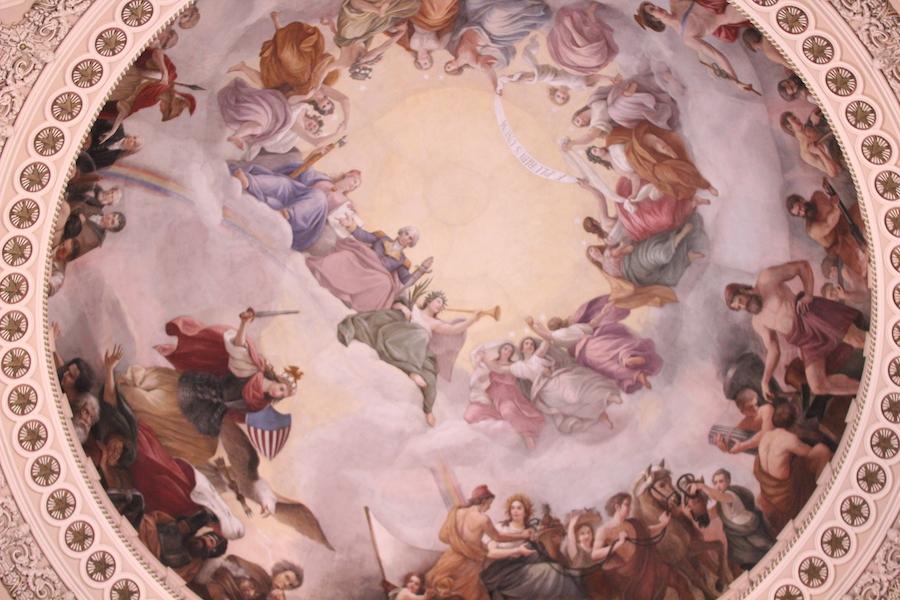 Constantino Brumidi’s “The Apotheosis of Washington" was painted on the ceiling of the rotunda inside the Capitol Building in 1865.

At the sight of the majestic fresco on the ceiling of the high-vaulted rotunda in the Capitol building, the juniors stared up in awe, amazed by Constantino Brumidi’s “The Apotheosis of Washington,” which depicted a god-like President George Washington sitting among mythological figures.

On Dec. 3, juniors in Advanced Placement (AP) U.S. History (APUSH) teacher Scott Campbell and English teacher Judith Bello’s HUM II went on a field trip to the Newseum. In addition, students also had a choice of either doing an activity at the National Archives and Records Administration (NARA) or going on a tour inside the Capitol Building.

“The Capitol tour was a really great supplement to our APUSH class,” junior Emily Moschella said. “A lot of the information that we are learning in class was also relevant to the tour and the history of Congress.”

However, those who opted for the NARA activity worked in small groups with one archivist and others as researchers for the day by inspecting primary documents to see if they related to certain articles of the Constitution.

“I thought this was an interesting and educational activity, unlike a typical tour,” junior Justin Yum said. “Looking at the documents was interesting, but it would have also been nice if they included transcripts for the documents so that we could have read and officiated them, rather than seeing copies of the old and faded documents in cursive writing.”

Afterwards, the juniors congregated at the Newseum, where they had the opportunity to come up with ideas for their yearlong research project by looking at exhibits. In addition, one highlight of the field trip was that students were able to get a glimpse of actor Will Ferrell, who was promoting at the exhibit of the movie he stars in, “Anchorman 2.”

“The trip was a great experience overall. I learned so much about the media’s impact on society,” junior Nihar Gudiseva said. “At the Capitol tour, I was in awe when I realized I stood where our Founding Fathers once stood. I really enjoyed our trip, and I hope to visit again in the near future.”