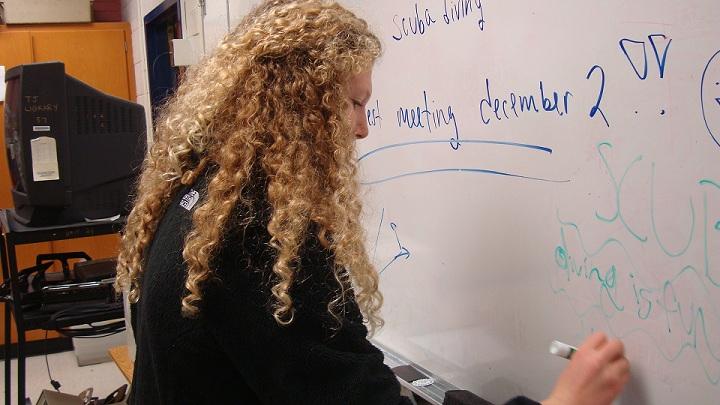 Sophomore Mollie Passacantando is one of the founders of Scuba Diving Interest, an eighth period club that meets every Monday.

Sophomores Valentina Lohr and Mollie Passacantando pioneered the unique opportunity for students to learn about scuba diving through Scuba Diving Interest, an eighth period club that meets every Monday.

“I thought that the club would be a good opportunity to help others on the way to scuba diving certification,” Lohr said. “Although a lot of people would really enjoy scuba diving, it is difficult to arrange a certification trip.”

Lohr and Passacantando are aficionados of scuba diving who enjoy the exotic underwater environment. Lohr, who owns an Open Water Diver certification, attended a week-long course for the written component of the certification and traveled to the Florida Keys last year.

“It can be difficult and expensive to get your scuba diving certification on your own, but once you do have it, there are many opportunities open for you,” Passacantando said.

The club is centered on lectures that present the rudimentary concepts of scuba diving, although Lohr is hoping to incorporate diverse methods of teaching for the upcoming meetings.

“We are trying to get some more interactive activities,” Lohr said. “We will be having special guest speakers occasionally.”

The officers hope that the club will broaden the awareness of scuba diving in the Jefferson community and prompt the students to earn their certification in a more collaborative environment.

“I hope to get more people to love scuba diving and their path to certification,” Lohr said.