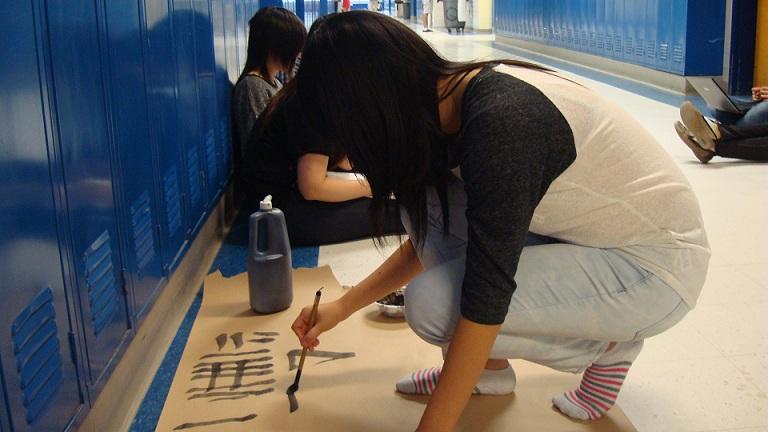 Members of Japanese National Honor Society (JNHS) are preparing for the calligraphy performance that will be presented during the Oshogatsu Festival.

Members of the Japanese National Honor Society (JNHS) are preparing for the annual Oshogatsu Festival that will be held on Dec. 13 during eighth period.

In order to celebrate “Oshogatsu,” a Japanese word meaning the New Year, the members are planning various activities for the festival, such as the calligraphy performance.

“For the performance, we have a lot of dancing and writing to practice,” senior Emily Zhou, the President of JNHS, said. “The members have to dedicate a lot of their eighth periods as well as after school time.”

With senior Juliana Said, the vice president of JNHS, Zhou is responsible for keeping track of the activities in progress and creating this year’s message that will be written during the performance.

“I have been the main person contacting the choreographers of this year’s dance,” Said said. “I try and help them create the dance to our expectations and keep them on schedule.”

During the festival, JNHS will be presenting traditional Japanese food, such as sushi, as well as other unique merchandise that will enhance the cultural awareness of Japan within the student population.

“For those who are not a part of the Japanese program at Jefferson, I want them to engage all five senses in Japanese culture-eat the sushi, smell the mochi, hear the J-pop, touch the brushes and see the calligraphy performance,” Zhou said.