“Day of the Doctor” surpasses expectations 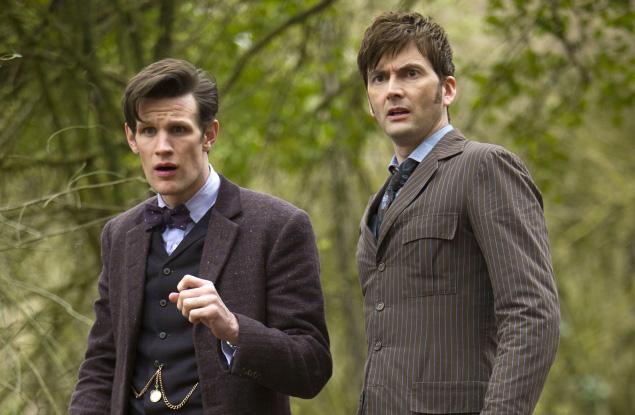 Still of the Eleventh Doctor (Matt Smith) and the Tenth Doctor (David Tennant) in "The Day of the Doctor." Photo courtesy of www.bbc.co.uk.

With almost 800 episodes produced since 1963, “Doctor Who” is the longest running science fiction television show in history. The 50th anniversary episode, filled with Sonic screwdrivers, the renowned TARDIS, Fez hats, Zygons and of course Daleks, did not disappoint fans when it aired at 2:50 p.m. on Nov. 23, exactly fifty years after the first episode of the original “Doctor Who” series premiered.

The fiftieth anniversary episode, titled “The Day of the Doctor,” provides the most elaborate and well-crafted plotline seen thus far in the show. While not the wish list than many fans had in mind when they tuned in to see the new episode, as it avoided answering many ongoing questions and evaded appearances and reunions that fans desperately wanted see, this adventure was the epitome of Classic Who, the original “Doctor Who” series, and reminded fans what made them fall in love with the show in the first place.

At the center of the episode lies the simple tale of the Tenth Doctor (David Tennant) and the Zygons, shape shifting monsters that mimic people and animals, emerging from oil paintings in London’s National Gallery to take over the world, a classic example of a “Doctor Who” episode. Coming to the rescue to help his past self, the Eleventh Doctor (Matt Smith) jumps through a time fissure to save the day.

The two doctors, with the help of Queen Elizabeth I – because what is “Doctor Who” without at least one important historical figure in the middle of the action? – work together to overcome these Zygons, but they are interrupted by yet another doctor.

This doctor, what has come to be known as the Eight and a Half, or War, Doctor (John Hurt), is on the brink of carrying out a mass genocide that has distressed and destroyed The Doctor ever since his ninth regeneration (Christopher Eccleston) walked out of the TARDIS in 2005. He is brought into the future to confront his future self and see first-hand what the consequences of his actions will be.

Confronted with the one regeneration that The Doctor never wanted to remember, the Eleventh and Tenth Doctors treat him with despair and sadness in their eyes, which the War Doctor does not fail to notice. He then realizes what his decision has done to himself over the years, and this leads to a complicated chain of events that will forever decide the fate of Gallifrey and The Doctor’s sense of self.

This dilemma of whether or not to push the big red button that will destroy his home planet Gallifrey, along with billions of Time Children, in order to successfully and finally end the Time War, was the perfect plot for an episode of this hype as it is a tale that satisfies both old and new fans as it tells a Classic Who story.

The complexities that come with such a colossal and life-changing event are evident throughout the episode, especially in the contrast between the Tenth and Eleventh Doctor. There is the regretful David Tennant who remembers exactly how many children died, and the forgetful Matt Smith who claims he has moved on from the event and forgotten. This is a splendid twist in the plot that shows how The Doctor has been forced to deal with his decision not in just one life time, but in all of them, and eventually leads the War Doctor to come to his grave decision.

Another aspect that caused this episode to be one of the most memorable ones yet is the humor in most scenes. Whether the nicknames created for each character, such as sandshoes, granddad and chinny, or the allusion to Christopher Eccleston’s ears when the War Doctor regenerates, the use of humor to lighten the mood is incredibly well done. Though the tale is one of sadness and loss, the small bouts of comedy are just enough to keep the audience engaged and light-hearted while also not overpowering the sad tone of the episode.

The shout-outs to Whovians, both young and old, are overwhelming in this episode. Not only did the episode begin at the same location as the very first ever Doctor Who episode, but a distinct Fourth Doctor-like scarf also appears wrapped around a nerdy peripheral character, and later the appearance of the actor himself (Tom Baker) when he speaks to the Eleventh Doctor. Even Rose/Bad Wolf (Billie Piper) appears to steer the War Doctor in the right direction, though she never meets the Tenth Doctor as fans had hoped since only the War Doctor can see her.

One of the hidden references that many fans missed, but many also caught, is that the numbers that The Doctor scratches into the wall as the code to send to Clara (Jenna Coleman), The Doctor’s current companion, matches with the date and time that the very first Doctor Who episode ever aired on television.

This show, however, while connected to the old episode of Doctor Who, also showed many promises and references to future episodes. With the appearance of the Twelfth Doctor (Peter Capaldi), even though it was just his eyes, eyebrows and forehead, fans were able to see what he would be like as the new Doctor, and are already excited to see what his portrayal of The Doctor will be.

Additionally, in the scene where the 13 doctors appear at once to save the day, another memorable moment from this episode, it is said that “all 13 doctors” have arrived, which caused many fans to believe that this may be hinting that Capaldi may be the final doctor. Though this is not confirmed, the age difference between the past two doctors and Capaldi, seems to confirm this idea for many fans, as The Doctor usually appears younger, rather than older, when he has a long future ahead of him.

Furthermore, near the end of the episode, Tom Baker, better known as the Fourth Doctor, appears as the museum caretaker. He looked just as old as Hurt, but where Hurt had seemed broken and lost, Baker seemed relaxed and at home. What he tells the Doctor in this moment seems to be foreshadowing for future episodes of Doctor Who, and maybe even for the upcoming Christmas special.

Though upsetting that many questions that fans, such as I, thought would be answered this episode were seemingly ignored, such as the name of the Doctor, and many other loose plot threads that could have been tied up, the episode was incredible overall.

Overall, this episode is definitely my new favorite right up next to “The Name of The Doctor” and “Blink” even though it is the last that we will see of my favorite doctor, David Tennant. His last lines were both heartbreaking and gratifying, though I will be forever sad to see him go.

I can honestly say that I was engaged for every second of the episode. Whether laughing hysterically at one of the many jokes or references to past Doctor Who episodes or wanting to cry at the fact that the Tenth Doctor was mere feet from Rose but couldn’t see her, it seemed that there was always something engaging me to keep watching.

Though the Christmas special is sure to be sad since we will be saying goodbye to the beloved Matt Smith, I can’t wait to see what else The Doctor will have to face. This series truly is a classic that deserves the praise that it received not only for the 50th anniversary special, but for every episode ever aired.