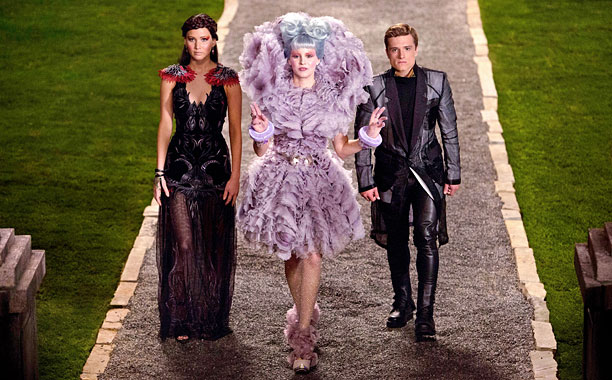 Rebellion isn’t the only thing ablaze in the second installment of the Hunger Games trilogy, “Catching Fire.”

Picking up soon after the completion of the 74th Annual Hunger Games, Katniss Everdeen and Peeta Mellark have become more or less celebrities to the people of Panem, viewed as darling sweethearts stuck in unfortunate circumstances, but are also seen as a rallying point for potential revolution. However, both are given no choice but to stay loyal to the Capitol and serve as its puppets or risk being executed, along with their families.

Jennifer Lawrence triumphs in the lead role of Katniss, making even the most action-filled sequences of the movie seem personable. Lawrence’s scenes with Liam Hemsworth and Josh Hutcherson, who play Gale and Peeta, respectively, are heartwarming and frustrating at the same time. The relationship between Hutcherson and Lawrence has improved drastically from the first movie in the trilogy, and both actors seem much more comfortable around each other.

Philip Seymour Hoffman steals the show as Plutarch Heavensbee, the game designer who is responsible for some of the violent and terrible things that happen in the arena. Sam Claflin is magnificent as the beloved character Finnick Odair, a charming but arrogant Hunger Games victor all grown up. The most terrifying out of all the people in Panem, however, is Stanley Tucci as game show host Caesar Flickerman, merrily praising the atrocities surrounding the games via television.

The film tends to lose steam in some scenes, particularly during the first half, which is concerning because of the decision to split the third and final installment, “Mockingjay,” into two separate films. “Catching Fire” is already somewhat repetitive and overly lengthy, so splitting the last movie into two may exhaust or even bore audiences.

“Catching Fire” offers everything for a Hunger Games fan—excellent CGI effects, brilliant acting and fresh faces. Though somewhat extensive in length, “Catching Fire” succeeds in bringing the second installment of the series to life.