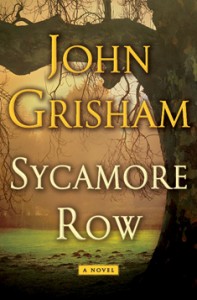 On Oct. 22, John Grisham released a new court drama novel called “Sycamore Row.” “Sycamore Row” features a main character from one of his most successful novels, a 35-year-old lawyer named Jake Brigance, as he attempts to save a last-minute, handwritten will from a left-out family.

Unlike many novels in this genre, the book begins quickly with the suicide of Seth Hubbard, a little-known but successful businessman in a small county in Mississippi. Several days later, the lawyer Jake Brigance, poverty stricken from the burning of his house, is mailed a handwritten holographic will from the deceased, whom he has never met along with a letter containing instructions for its execution.

The contents of the will are even more striking. The will leaves almost all of the considerable assets of Seth Hubbard’s estate to his African-American housekeeper and renounces a previous will written by a large and well-respected law firm that included is friends and family.

As Mr. Hubbard’s family arrives, they are shocked and dismayed at the appearance of the new will and immediately begin fighting for it to be declared invalid, which would leave the previous will intact. The case quickly blows up as it is revealed that Mr. Hubbard’s assets could amount to $20 million, which is the largest amount of money many people of Ford County, Mississippi, especially the African-American housekeeper Lettie Lang, have ever seen.

As the case grows bigger and more important, questions quickly arise. Why did Seth Hubbard leave almost $20 million to his housekeeper? Was there something more between them? Is the new will authentic, or was it written in the throes of the lunacy of a suicidal man? All of these questions keep the reader intrigued throughout the book.

This book stood out because it was easy to follow, as is often not the case with court dramas. It was easy to keep up successfully with the plot and follow all of the characters because there were not so many characters or plot convolutions that the novel was obscured the novel beyond comprehension. Instead, the book is just fast-paced enough to keep the reader interested but not so fast-paced as to be confusing. There is also room for the development of relationships and intense focus on a few characters, especially through racial tensions throughout the book.

“Sycamore Row” is definitely a success for lovers of Grisham and lovers of the court-drama genre in general. The investigation of this high-profile suicide will keep the candle burning to a stub for readers of all audiences.