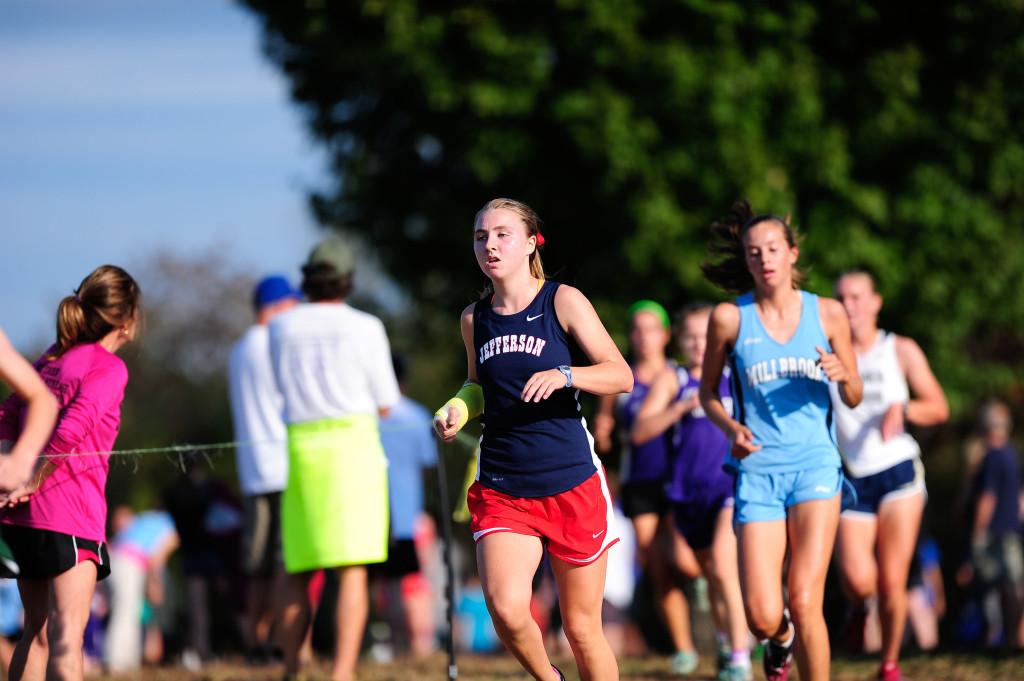 Over and over again this season, junior Haley Stumvoll has asserted herself as the preeminent runner on the Jefferson girls’ cross country team. A strong, consistent runner and leader, Stumvoll helped lead the girls’ team to the title of conference champions at the district meet and to second place finishes at the regional and state meets with her impressive performances.

Background: Stumvoll began running for Jefferson in her freshman year, although she has been ‘running’ since she was young through local races such as the Turkey Trot. Stumvoll joined the cross country team after following in the footsteps of her older siblings, all three of whom greatly enjoyed the sport. Stumvoll raced in freshman and underclassmen junior varsity races in the 2011 season, and she joined the varsity squad in 2012, her sophomore year.

Upcoming activities: Stumvoll plans to race at the Foot Locker South Regional meet, which will be held at Charlotte, N.C. on Nov. 30. Last year, she ran there with junior Katrina Junta, a teammate on the Jefferson varsity girls’ team. The Foot Locker race draws athletes from 15 states; Stumvoll will be running in the seeded girls race, which hosts some of the fastest high school athletes in the country.

Stumvoll also runs varsity winter track in addition to cross country, in which she competes in events such as distance relays and the 1000, 1600 and 3200 meter races. She plays for Jefferson’s varsity soccer team in the spring.

Q-and-A: On Nov. 20, tjTODAY interviewed Stumvoll on her athletic accomplishments.

Q: What did you do to prepare for the upcoming season? What contributed to your success?

A: Over the summer, I followed the summer running schedule made by Coach James and swam on a summer league team. I think both cross-training really helped build my endurance. This season, I actually did my summer running, which really helped me since I did not have to play catch up at the beginning of the season.

Q: What was the best part of this season?

A: The most memorable part of the season was right after the state race when the coaches at the finish congratulated the team; all the coaches were so happy and proud.

Q: How do you motivate yourself before and during a race?

I start getting pumped up the night before by focusing really hard on the race and mentally preparing myself to do well. During a race, I literally tell myself to go faster.

Q: What is your favorite part about cross country?

A: My favorite part about cross country is the team aspect. Everyone does the same workouts and the same runs. The team gets so close by the end of the season, and I miss that during track because it seems as if everyone is doing something different.

Q: What goals do you have for Foot Locker, and how are you preparing to reach those goals?

A: I want to run the race with a time in the mid-19s. I’m not concerned about place as much as time because there will be girls running a good minute or so faster than me. Instead of taking the week after States off to rest and recuperate for the track season, I’m training through until Foot Locker and taking the week after off instead.