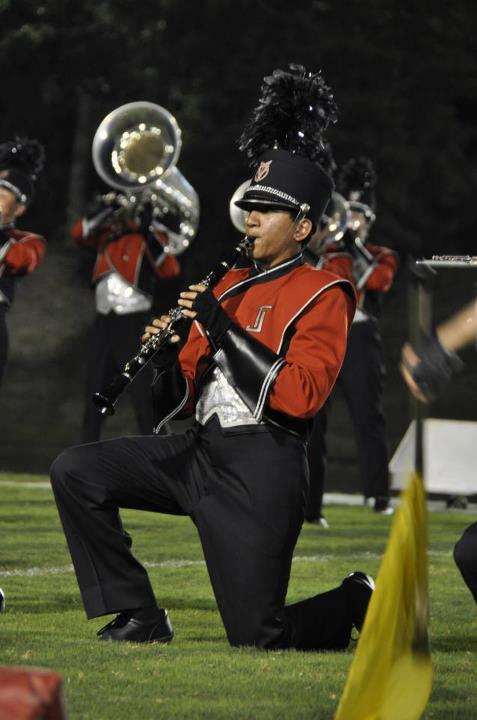 Jefferson's Marching Colonials at half time during a school football game.

After placing second in their Annapolis competition and being named Virginia State Champions, the Jefferson Marching Colonials (TJMC) celebrated their success with awards for their members. With awards for both serious topics and hilarious superlatives, marching band members received recognition for this success this season on Nov. 12 at their award ceremony.

People received awards for the leadership positions they held, prestigious “Most Improved” and “Most Outstanding” awards from the staff for each grade level and superlatives like “Funniest,” “Best Smile” and “Most Hardcore” that were chosen by students in the band.

The team also watched a slideshow of pictures of events throughout the season that included band camp over the summer, Homecoming, parties, competitions and other fond memories of the past season.

“The experience was nostalgic. Everyone was sad that TJMC is over, and the seniors won’t be with us next year,” junior Coco Chen said. “My favorite part about the ceremony was the slide show, which was created by the tri-historians. It captured many great moments from the season.”

Though the ceremony was different from previous years because the cafeteria was not available for the usual banquet where they serve dinner, the band members enjoyed dessert in the auditorium lobby accompanying their awards.

“The experience was one I will never forget even though it was in a different location than previous years,” Parker said. “Everyone always walks away smiling and laughing and it is a fantastic way to end a phenomenal season with the greatest friends anyone could ask for.”

“After spending somewhere between four months and four years bonding with each member of the band, we all appreciated an opportunity to relax together in such a celebratory manner,” Parker said. “We truly had the chance sit back and enjoy ourselves as we were awarded for our successes this season.”

While many seniors say goodbye to Jefferson’s marching band, this award ceremony was bittersweet for them as they spent their last few hours as a group among the rest of their band members.

“As a senior, it was very emotional to know that it was my last year as part of TJMC, but it was a great honor to be recognized for my contributions over the past four seasons,” senior Maddy Naide said. “I’m sure it was that way for the rest of the seniors as well.”