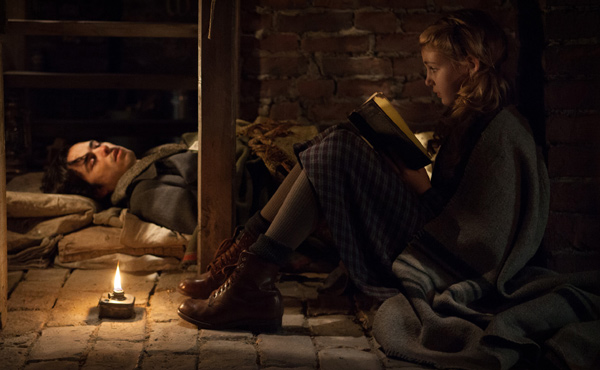 “The Book Thief,” based on the bestselling novel by Markus Zusak, captured audiences around the world this past weekend when it was released on Nov. 15. The story revolves around an adolescent girl Liesel Meminger (Sophie Nélisse), a book thief during the time of Nazi Germany. When tragedy strikes her family, Liesel is adopted by a compassionate painter, Hans Hubermann (Geoffrey Rush), and his firm but affectionate wife Rose (Emily Watson).

When Liesel is teased by her classmates for her inability to read, Hans commits himself to teaching his adopted daughter how to read and write at a time when the Nazis have begun outlawing most literary works. Liesel begins to become accustomed to her life with the Hubermanns while she attends school and reads all of the books that she can get her hands on.

One night, a mysterious Jewish man, Max Vandenburg (Ben Schnetzer) appears at the house on the verge of death and Nazi’s on his tail hunting him down. His appearance reveals ties to Hans’ past, and the Hubermanns offer him refuge. Liesel and Max begin to bond over the power of words, but the rise of Hitler leads to the life of the four characters to become increasingly precarious.

Anyone who has read the novel knows that it is full of many interesting characters and contains many encounters that provide plenty of room for worthy actors to shine in. Regrettably, this movie causes this masterpiece to become an inexplicable clutter of content that includes some of the books most vital ideas, but fails to explore them beyond the surface level plot points. It is clear that director Brian Percival was pressed to include as much as he could and was forced to cut out important scenes from the book causing the film to fall short in several of its most important moments.

The plot moves so quickly that the audience barely has a chance to meet a character long enough to miss them when they are stolen off to war, much less feel their absence. Even relief when a character comes out alive from a perilous situation where they are thought to be dead is almost impossible to feel because the plot accelerates forward much to quickly. The iconic relationship between Liesel and Max is especially disappointing as it is cut down to only a few sweet moments rather than the incredibly close relationship the two have in the book. Their friendship as a whole seems incredibly rushed and unearned, making the bond seem forced and not as close. This is probably because Scnetzer is underutilized in the movie while he enjoys a much more prominent role in the book, leaving him to not live up to the character in the novel despite the actor’s capabilities.

This enthralling performance by the cast, especially Sophie Nélisse as she presents a delicate tone and demonstrates the fear and uncertainty that haunted all people, including the German citizens, throughout Hitler’s regime, makes the movie into a spectacular production. Of course, Rush and Watson also play a vital role in the unbelievable acting seen on camera in this film as they play her foster parents almost exactly like the book depicts them. Rush brings his humor and dramatic authority into Hans’ character to make him the most likable and sympathetic character in the film, while Watson manages to make Rose into an endearing mother figure.

However, even though the cast is impeccable in their roles, the film lacks many other qualities, including the complexities of the novel itself.  While it is true that Percival exhibited the interesting collocations from Nazi Germany, such as children singing about the inferiority of non-Germans, the film seems to gloss over the repulsion of the greater Nazi-led extermination and leave out crucial sections of the novel that would have made the film so much better.

This movie left me feeling uncertain about how I felt about it as a whole. It definitely managed to capture the intricacies of the time by using individual stories of Germans who were not strategic and deceitful in Hitler’s agenda successfully, it was incredibly lacking in certain scenes where the story seemed so broad that it reduced multi-faceted social issues into one-note caricatures.

While the film shows the main storyline of the novel, “The Book Thief” falls short in the development of its characters and showing tension and exposition in the events, rather than simply sharing them as interconnected events. What this movie was lacking was a more deeply explored setting and people through unique or memorable insight and a better portrayal of relationships and thematic ideas that were not as fully realized in this film as they could have been. This movie will definitely appeal to moviegoers who appreciate films for the quality of their actors, settings, and humor within drama, yet fans of the book itself will be disappointed in its shortcomings as I was.