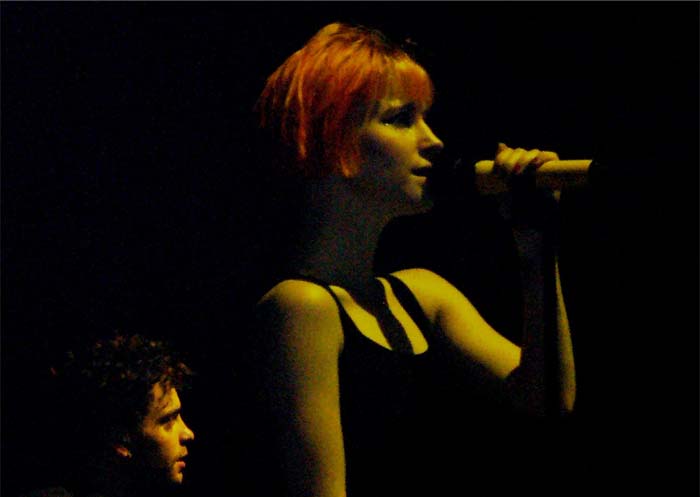 When going to a typical concert, one can expect to enjoy the music, occasionally have the opportunity to dance, and possibly have a friendly earache at the end of the night to remember the fun by. However, the Paramore show, held at George Mason University’s Patriot Center on Saturday, November 9th, exceeded all expectations, breaking down the boundaries laid between concert attendees and performers on stage.

The band’s lead singer, Hayley Williams, excitedly met the audience with her flaming orange hair and sparkling eyes, eager to communicate to the crowd. The genuine tone of gratitude in her voice as she thanked them for coming to hear her band perform made the stadium literally light up, and as she began her first song “Fast In My Car” it was obvious it was going to be far different from the usual concert.

Of course, Williams did not spontaneously become the ideal crowd pleaser overnight. She and her band have been touring for well over eight years, with their premier album debuting in 2005, “All We Know Is Falling”. Paramore also experienced near collapse within the past few years, after ex-co-founders and Josh and Zac Farro left the band in 2010, leaving Williams and remaining band members to cancel parts of their European tour scheduled for later that year.

Despite the problems Paramore hasencountered, it soon became apparent that the band’s previous struggles only lead to further dedication to their music. Songs featured passionate lyrics inspired from the outcome of the trauma, such as those found in Paramore’s most recent album released in April  2013, “Paramore”, deviating from their past punk-rock genre into more complicated and dangerous territories of love, motivation, and moving forward in life. A song performed they performed early on in the concert, “Now” showed their newfound determination to rise to the top of the music charts and recover from their past, with lyrics such as, “We’re starting over, we’ll head back in/ There’s a time and a place to die but this ain’t it/ …If there’s a future we want it.”

Paramore faced criticism that the self-titled album was too “mainstream” for the taste of older Paramore fans, due to the pop music influences in a few of the songs on the new album. Nonetheless, a majority of Paramore’s fans, including those from their start in 2005 and those recently gained from “Paramore”, did not care too much about the differences between the band’s older and newer music styles. Upon request of the band, every fan in the crowd fervently swayed to and shouted each word of every impressive note that Williams sang in sync with the rest of the band onstage. Even when technical difficulties arose and the microphones on stage blew out, Williams and Paramore’s band members acted flawlessly, deciding to get up close and personal with the pit-crowd and talk to their fans amicably while the issues with the equipment were being taken care of.

The concert did not merely contain Paramore’s recorded music. Instead, the band decided to perform unreleased songs and “intermissions”- including “Moving On”-, which are small bits of songs allowing for the band members to set up for further entertainment, both of which are unavailable through public music purchasing stores, such as iTunes. One of these songs, “In the Mourning”, was only recently released on a mass scale through YouTube, and gave even the most avid of fans an experience which they could not find by purchasing an album.

The night concluded with Paramore performing their most recent hit single, “Still Into You”. William’s fans went ballistic as balloons, embellished with the band’s album cover on their surface, fell upon the pit audience. Confetti cannons, filled with orange butterflies (a favorite symbol of the band) erupted as during the finale of the show.