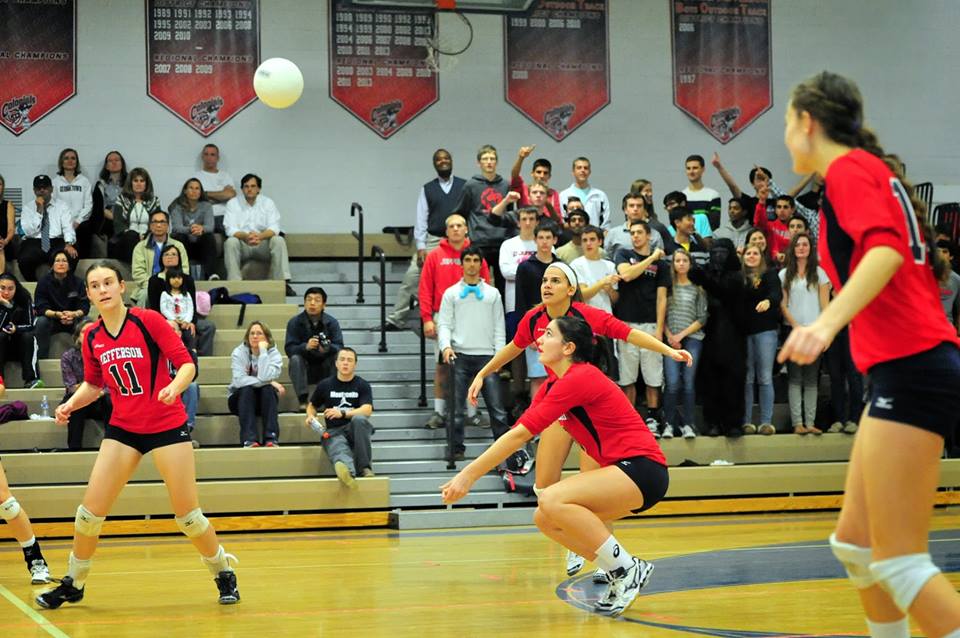 After one of the most intense and victorious seasons in volleyball history, Jefferson’s team ended their season at their regional semifinal match against Stone Bridge on Oct. 14.

Having won the Capitol Conference championship for the first time in school history, the team had come into the regionals with high expectations, but knew that they were not guaranteed a win. Even after beating Halifax Country High School in the Regional quarterfinal 3-0, they still came into the game with a mindset that they had to give their all in order to succeed.

“As the number one seed in regionals, I thought we definitely had a great chance at winning the tournament, as long as we come out and play our best,” senior Melanie Piller said after their quarterfinal victory. “At this point, we don’t really know what will happen since the competition is only going to get tougher from here.”

After a hard fought game against Stone Bridge High School, Jefferson’s volleyball court left the court with a 3-0 loss and no chance at gaining the regional champions title.

“The match against Halifax was not incredibly hard for us because we were so determined to continue our season and excited from our conference victory,” junior Alexis Gillmore said. “We knew going into the game against Stone Bridge that it would be rough, and we are proud of how we played.”

Even so, many of the players commend their incredible performance not only in this game, but throughout the season. Not only did they make school history by winning the conference championship for the first time, but they had one of the best records in volleyball’s history at Jefferson.

“I think we’ve been much more focused on working hard and achieving our goals this year than in years past, which has definitely contributed to our success this year,” Piller said. “We could definitely go farther in playoffs next year.”

Even though the season is over this year, many of the players believe that next year’s season will be just as good, maybe even better. They all agree that if the team puts in the effort, they will have the chance to make school history again with a Regional victory and maybe even a State championship title.

“It’s hard to tell how the team will do next year since we have a max of nine returning players who have played together almost every year,” senior Amanda Nguyen said. “I believe that with continued hard work in the off-season this year, our team will excel next year again.”