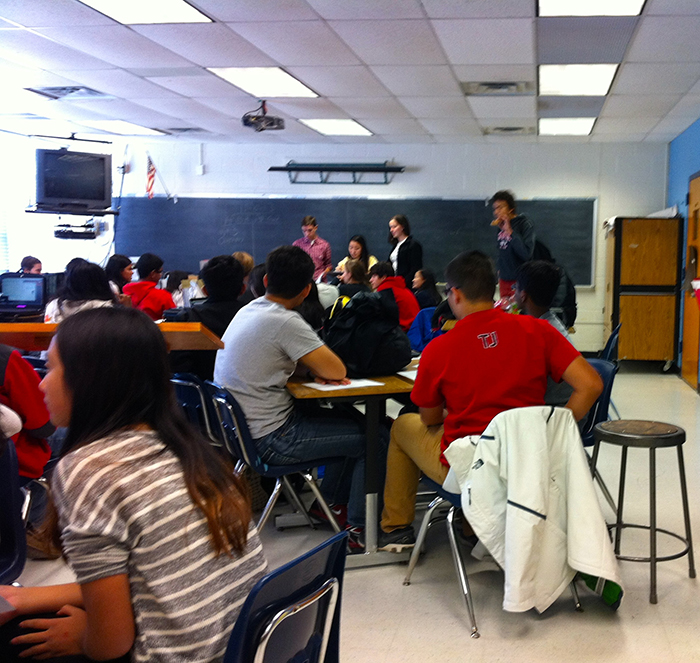 The room is silent as role call started, beginning the annual Jefferson Mock Model United Nations conference on Nov. 1. A sense of excitement as well as anxiety was prominent as delegates quickly sat down and raised their countries’ placards.

Model United Nations (MUN), one of Jefferson’s largest clubs, officially kicked off its season with the Mock Conference. Students chose and represented their country as delegates who debate in committees run by the club’s officers. This year, the two novice committees included Social, Humanitarian and Cultural Affairs (SOCHUM) and Disarmament and International Security (DISEC).

In the committee, delegates from each country raise their placards and are chosen by the chairs to debate on a wide range of topics including women’s rights and drone warfare. In addition, delegates could motion, or request, for an unmoderated caucus, where representatives from all the countries can openly work together to compromise a solution. The top-preforming delegates in the mock conference will be chosen to attend the William and Mary High School MUN conference later in November.

“We use the mock conference as a measuring stick or guide bar to see how well students will preform in the novice committee at the William and Mary trip.” junior Aidan Hennessey-Niland, the chair for DISEC, said.

Jefferson students show an enormous amount of devotion and dedication to MUN in general. The club focuses on specifically teaching students how to debate effectively and negotiate diplomatically.

“We are more passionate about MUN,” Hennessey-Niland said. “We do the little things right in MUN like pride ourselves on research as well as having good diplomacy and influential negotiations.”

Many students, such as freshman Adam Kim are experiencing high school MUN for the first time. Now that the Mock Trial is over, students such as Kim will continue to prepare for the WMHSMUN conference during eighth periods at Jefferson.

“Everyone is so devoted to the club,” Kim said. “The fact that I get to help contribute and learn about current topics around the world is the motivating factor of why I do MUN.”