Cross country shines at regional meet to qualify for States 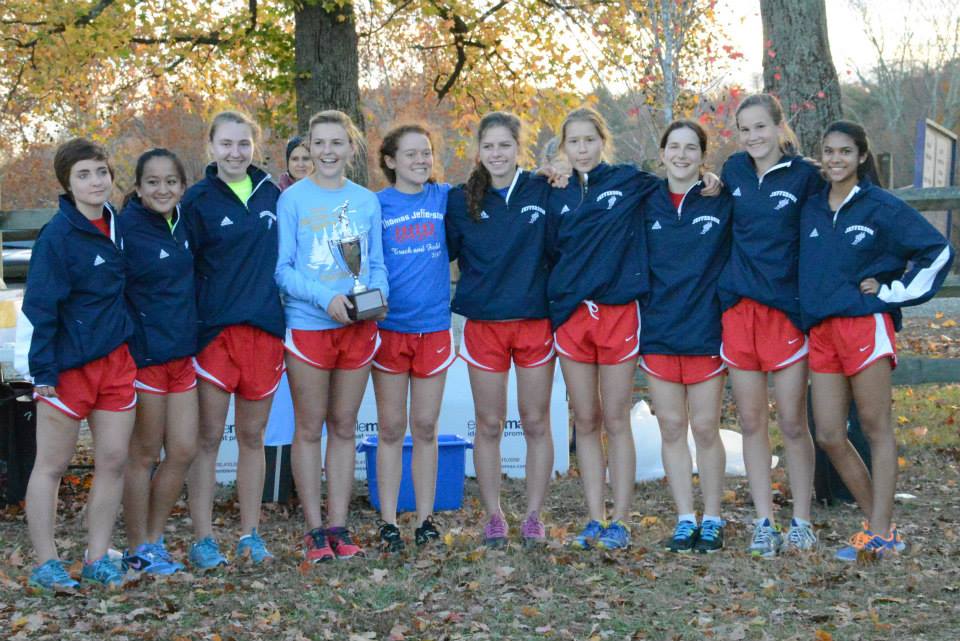 The girls' team placed second at the 5A North Region Championships on Nov. 6. Photo courtesy of Sally Stumvoll.

On Nov. 6, Jefferson’s cross country team ran a terrific race at the 5A North Regional meet at the Oatlands Plantation, in which both the boys’ and girls’ teams qualified for the state meet. This feat has not been accomplished since the 2011 fall season.

Junior Haley Stumvoll led the girls’ team to a second place finish with 71 points; she placed fourth out of 95 runners to earn All-Region honors. Overall, the girls’ team suffered a narrow, one-point defeat at the hands of Tuscarora High School.

“We were nervous but really excited because we knew we could do well,” Stumvoll said. “I would say both the team and I surpassed our goals because we placed second by such a small margin, and I ran an all-time personal record.”

The final leg of the journey is the state championship meet, which will be held on Nov. 16 on the Great Meadow 5K course. The athletes are planning to improve upon their finish from the 2011 state meet, in which the girls placed 10th while the boys placed sixth.

“Our goal is to make the podium at States,” Stumvoll, who hopes to break the elusive 20-minute barrier, said. “Our biggest challenge will be getting mentally prepared and hyped up for the meet, because sometimes it’s too easy to psych yourself out.”

The boys’ team, of which five of the seven runners are seniors, looks forward to making the last race of their high school cross country career count.

“We’re happy to bring the team back to States,” senior Chandan Singh, a captain on the boys’ team, said. “It’s been years since the last time we made it, and we’re all happy to be a part of school history. It’s our last race together, so we’re planning on pulling some upsets.”