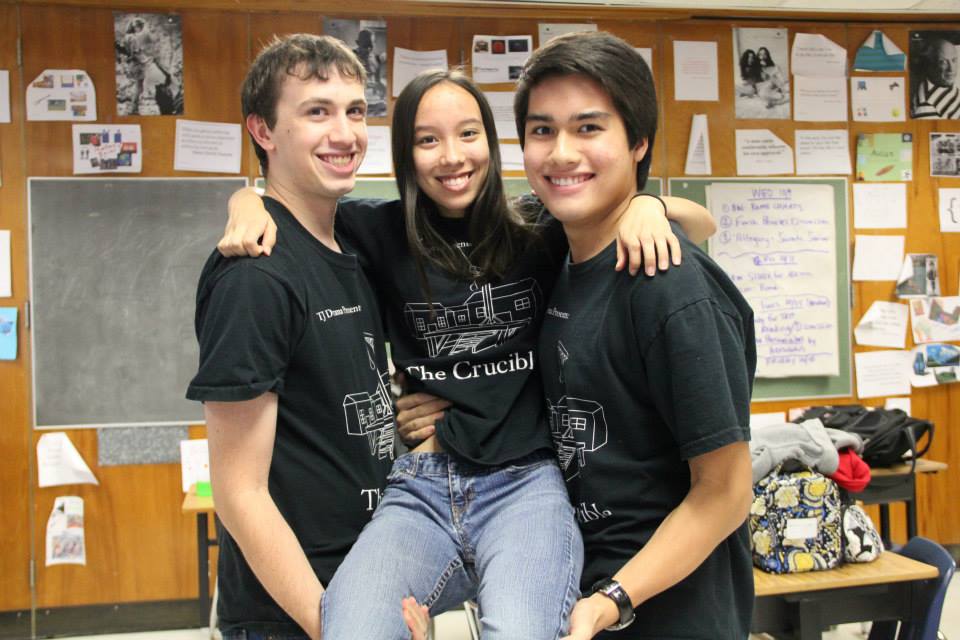 Seniors Adam Friedman, Liesl Jaeger and Ben Andre wear their show shirts from the Spring 2011 production of "The Crucible."

Members of Jefferson’s drama program participated in the “Show  Shirt Countdown” tradition for the past three weeks, donning a different t-shirt each day from the various Jefferson Drama productions throughout the years.

“Show Shirt Countdown is something we do before every show,” senior Daniel Sainati said. “It’s a tradition that advertises the upcoming show, but also reminds us of shows we’ve done in the past.”

The countdown also serves as a way to display all the shows that people have been a part of since their freshman year, particularly for upperclassmen.

“I like to think of the wearing of the shirts kind of like wearing medals, because it just shows everyone what you’ve been through and accomplished,” sophomore Jake Gonzalez said. “It not only gives us a way to show our spirit and love for drama, but also our long-lasting dedication.”

In order to keep a variety of shirts, every show’s shirt is a different color, and the colors often rotate on a four-year cycle to make sure no two shirts during the countdown will be the same. The upcoming production’s show shirt is maroon, and will be used to advertise the 27th Annual Knight of One Axe.

“This show is a collection of one-act plays in lots of different styles, from comedy to Shakespeare,” Sainati said. “People can see it on Nov. 8 and 9 at 7 p.m. in the auditorium, and it’s going to be amazing.”