Teknos prepares for the upcoming issue 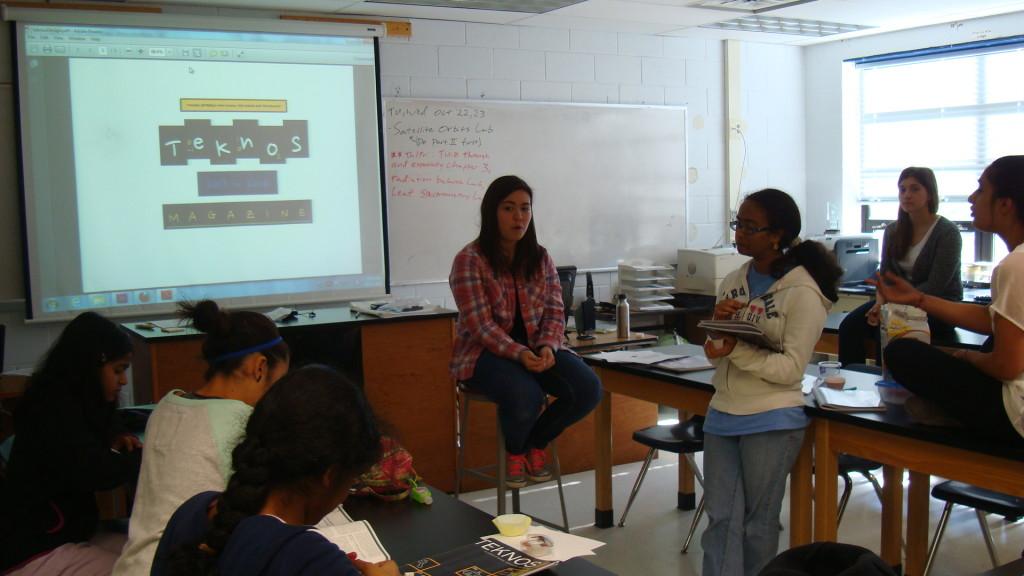 Senior Kinsey Moser leads a discussion about the layout for the upcoming Teknos issue.

Teknos, Jefferson’s journal of science, mathematics and technology, continued its preparation for the upcoming issue this month by discussing layout changes. One of Jefferson’s award-winning publications, this science magazine compiles various science project reports written by Jefferson students into a publication.

Last year, the magazine published reports about projects that ranged from geology and neuroscience to biology and biotechnology, offering a wide spectrum of scientific fields for students to read. As the students are gearing for second quarter, the editors are beginning to shape the overall frame of the upcoming issue.

“Right now, we are making the new layout and working on graphic designs for the new issue,” senior Linda Lay, one of the senior editors of Teknos, said.

Currently, the members of Teknos are comparing previous years’ magazines to form a rough guideline of specific fonts and designs that might potentially be used this year. The discussions are held during the publication’s eighth period meetings on Friday A and B-blocks, in which students from every grade level exhibit their opinions on previous issues.

“We are getting everything ready before the papers and articles arrive in March, when the seniors are finishing up their research projects,” Lay said.

In the spring, the members will be able to evaluate which submissions will be published in the journal, which will be edited and read before they are added to the magazine.

“Jefferson is the only high school to have a science and research journal,” Lay said. “This really sets apart Teknos, because I think this publication best reflects the wealth of science and technology we have at Jefferson.”