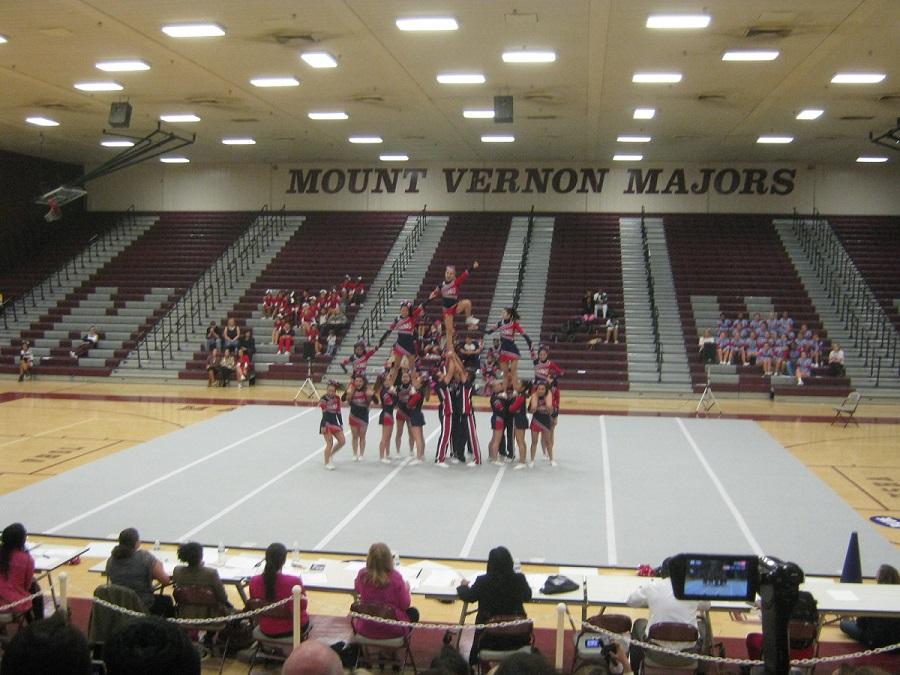 Jefferson Cheerleading takes the mat on Oct. 23 at the District Final Competition.

The Jefferson Cheerleading program has made history, advancing to the Regional Conference for Northern Virginia for the first time since 1995. Although the team did not take the District Champion title, Jefferson placed second at the Capitol Conference District Finals on Oct. 23. The team will compete on Nov. 2 for the Regional Competition.

“After Semi-finals we kind of knew what to expect, and it was really exciting knowing we had a shot at being first in the district,” senior Allison Ko said.

During round one of the competition, the scores of the teams determined the top four teams in the district. The Jefferson cheer team hit all of their stunts with no technical deductions for the first round, but came in second place behind Falls Church by six points. However, deductions for the squad included sharpness of motions and overall loudness of the cheer, as well as clean transitions and timing for jumps.

Since new judges critiqued teams, deductions for the colonials were taken from different aspects of the score sheet than in District Semifinals. Having previously acted as coach for top-scoring teams in the district, each of the judges carefully watched the team’s stunting ability, motions, tumbling and dance.

In round two, Jefferson still remained at second place behind Falls Church, but managed to bring their overall score from 222 to 228 points. This nearly closed the gap between second and first place, but the team still came in behind Falls Church who received a total of 234 points in the second round.

“I think Finals went really well, considering all the changes we made in the past week between Semi-Finals and Finals. We performed at the top of our game,” senior Yana Kaplun, a captain, said.

Because Jefferson placed in the top four schools in the district, the team will advance to the Regional Competition. If the team places in the top six teams at Regionals, they will compete at Regional Finals the following week.

“We were all really confident and we are proud of our results at Finals,” Kaplun said. “We are ready for Regionals.”