UNICEF prepares for the Hunger Banquet 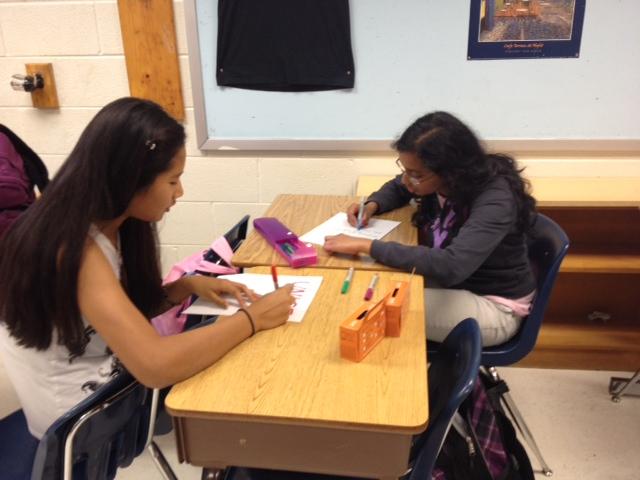 Students create fliers to promote UNICEF's Hunger Banquet, an event that will be held on Nov. 1.

With pink, orange and light green sharpies scattered around the desks, students finished their last stroke of color on their colorful fliers to promote the United Nations Children’s Fund (UNICEF)’s annual event, the Hunger Banquet.

UNICEF, a global organization that strives to create a better environment for all children, attempts to resolve current issues occurring around the world, such as inadequate education, HIV/AIDS and child abuse. At Jefferson, the UNICEF club engages in multiple activities throughout the year that increase awareness of these prevailing issues.

“I think UNICEF helps students develop a better understanding about the world,” junior Nur Simsek, the president of the club, said. “Through both local and global service activities, I think UNICEF members can build a stronger connection to the environment around them.”

The Hunger Banquet, an event that will be held on Nov. 1, is a special eighth period activity, in which each student is given a special role with a specific status and wealth that dictates the amount of food they receive.

“The participants will not only learn that children around the world have so little food, but also how even the smallest piece of food can be so much to someone across the globe,” Simsek said.

Since the beginning of the year, UNICEF has been involved with various activities, such as making peanut butter and jelly sandwiches and participating in Trick-or-Treat for UNICEF, an activity that encourages students raise money in Halloween by using special fundraising boxes provided by UNICEF. Through these activities, the members of the club are able to increase their horizon of the world and learn about the current issues regarding children today.

“I hope to get a broader perspective of the world by acknowledging the fact that there are children who are impoverished and trying to change that for the better,” sophomore Surbhi Patel said.