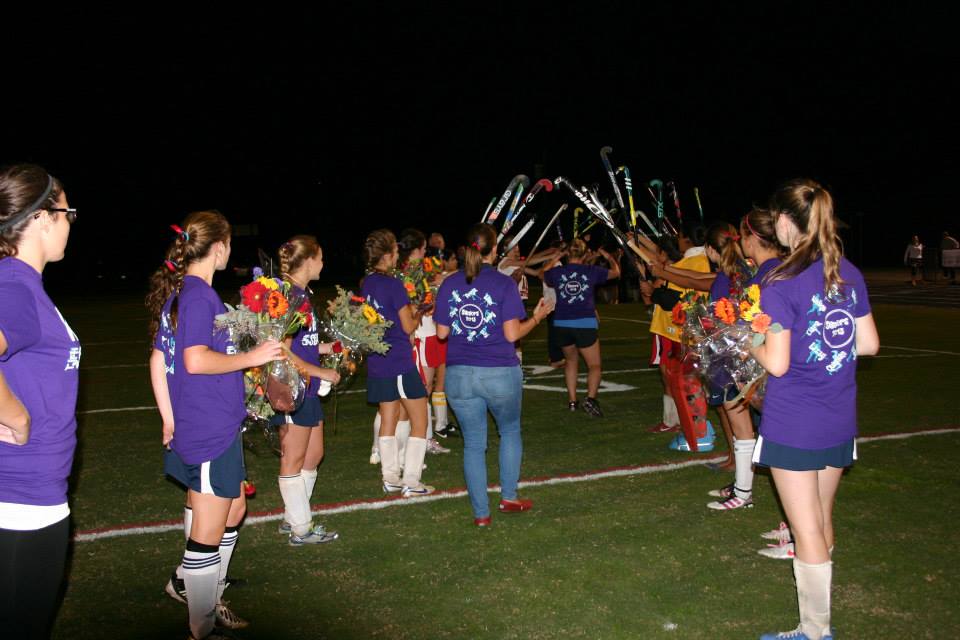 Field hockey players create a tunnel for the seniors to run through.

Of all the field hockey games of the season, the players always look forward to Senior Night more than any other game. Not only is it a match filled with the hard work and dedication of the team as they work towards victory, but it is also a night to celebrate the final season for many of the beloved players on the team.

This year, Senior Night took place on Oct. 17 and all of the non-senior field hockey players put together an elaborate plan for what was sure to be the best game of the season. Not only did all of the juniors wear “I Heart Seniors” shirts to school along with pins of their favorite seniors’ faces, but they also had an extravagant plot ready for the game itself.

“The non-seniors on varsity have been planning Senior Night since practically the beginning of the season. We wanted to make the night special for our parting seniors, but we couldn’t have done it without the help of our entire field hockey program,” junior Jenny Kim said. “Although it was a hectic day, I think it’s safe to say Senior Night went smoother than I hoped and I am so glad I was able to spend time with and learn from our senior ladies for the last three years.”

Before the game, the field hockey team decorated the stadium with streamers, ballons, and a variety of other adornments, and wrote the seniors’ names in chalk. Then, when the game began, the players made a tunnel of field hockey sticks, and the seniors walked through it escorted by their parents, grandparents and siblings while the announcers read out their favorite memories, quotes and advice for the other players, as well as any other sentiments the players had.

At the end of the match, the players presented the seniors with flowers and bags with personalized mugs and shirts along with other small surprises including slippers, photo collages of the players at field hockey games and practices, puppy chow and glittered field hockey balls.

“My Senior Night experience was incredible; the juniors definitely did a great job” senior Quinnlan Sweeny said. “My favorite part was when all our speeches were read over the loudspeaker. It was great to hear everyone’s memories and what they enjoyed about the season.”

Although Jefferson lost the match to Langley, which they had been hoping to win in order to honor their seniors, the night still turned out to be a phenomenal success. Not only did they play a hard-fought game together as a team, but they also showed dedication to each other and honored the seniors that they will miss in the next season.

“I think our Senior Night was the most special because of the seniors. We all are great friends and great teammates,” Sweeny said. “We have so much potential as a team and that starts with all the passion and talent each senior brings.”