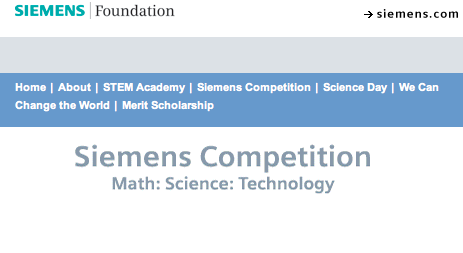 The Siemens Competition is one of the most acclaimed science competitions in the United States. Photo courtesy of www.siemens-foundation.org.

On Oct. 18, the results of the regional Siemens competition were announced. The competition awards scholarships from $1,000 all the way up to $100,000. This year, there were six regional finalists from Jefferson, made up entirely of students from the class of 2015, in addition to 17 other mixed-grade semifinalists.

“We interned for 20 hours a week doing research, learning and writing the paper and spent a lot of time outside of the internship working,” junior Jeffery Liu, a regional finalist, said. “This is all of our first times submitting to Siemens.”

Unlike the similarly prestigious Intel competition, Siemens allows teams to enter projects. Liu’s teammates included juniors Jessica Wu and Wilson Zhou. Because of its earlier September deadline, most students find that it is their summer research that is ready to be submitted.

“I’ve been working on my project for a couple of months,” junior Tim Cha, a regional finalist, said. “For my project, I mostly concentrated on detecting cancer using aptamers and chemiulinescent biosensors.”

“This was my first year doing Siemens,” senior Kunal Khurana, a regional semifinalist, said. “I did my project in about eight weeks at a molecular genetics laboratory at the National Institutes of Health over the summer.”

In 2011 and 2012, Jefferson acquired four regional finalists a year, with eight and 11 regional semifinalists respectively. All participating individuals and teams are judged in categories such as creativity, field knowledge, scientific importance and clarity of expression.

The national results will be announced on Dec. 10. The individual and team winners will each win $100,000, and finalists can garner up to $50,000 in scholarships.