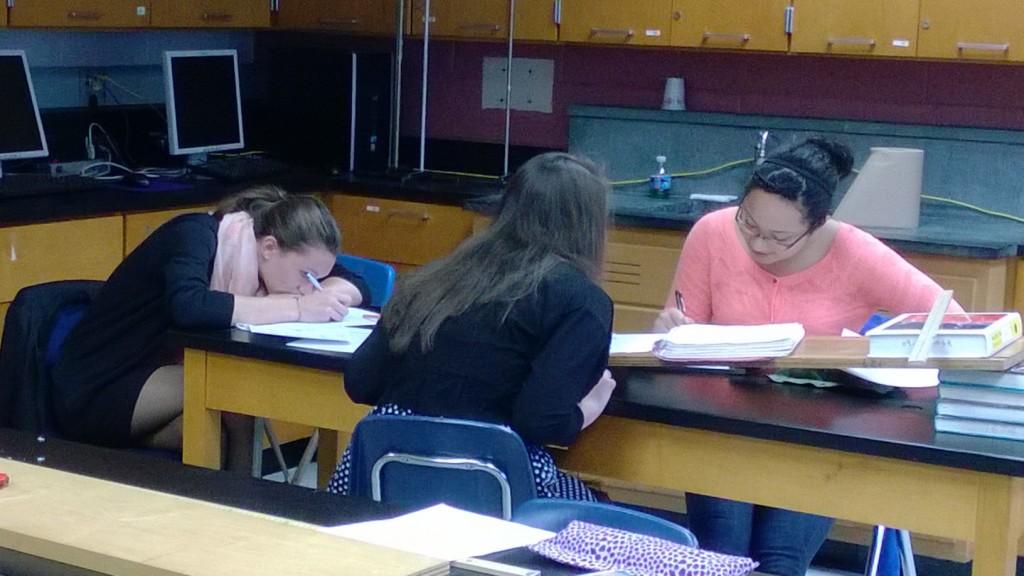 Hosts take many of their exchange students with them to classes such as physics, where they can participate in classroom activities.

On Oct. 14, while many American students were enjoying their Columbus Day out of school, 17 French students arrived at the airport, ready to meet their host families from Jefferson. The exchange program was built from an annual partnership with Roosevelt High School in Reims, France, located about an hour east of Paris, and is coordinated by French teachers Genevieve Delfosse and Cynthia Van De Kamp.

“The French students, particularly the freshmen and the hosts, are often very excited for the exchange students,” Van De Kamp said.

The exchange students follow their host students’ classes, observing and even sometimes participating. Exchange students Yacine Fourati and Allison Vroman enlightened one Advanced Placement U.S. History class about how the American Revolution is taught in France. Jefferson students are also able to benefit from the exchange by learning about French culture and language in a more informal setting.

One new concern for the program coordinators this year was whether the exchange students would be able to visit the museums in Washington, D.C., due to the government shutdown. Fortunately, the shutdown was ended early enough into their visit so that they still have that opportunity. In the meanwhile, plans have already been made for what they will do for the rest of the month of October.

“We’re planning on taking them to a haunted house,” junior Mikaela Ruiz-Ramon said, “And there is supposed to be a Halloween party too. It’ll certainly be a new experience for the students.”

For the hosts, however, planning began months ago. After being assigned to each other, hosts and exchange students were able to communicate with each other beforehand through email and Facebook before ever meeting face-to-face. For some hosts, the arrival of the French students was a chance to see old faces again from last year—either from the their last visit or the trip Jefferson students take to France every spring break.

“I look forward to reconnecting with all the French students I met when I traveled to France and meeting some new students as well,” junior Heather Lukas, a second-time host, said.