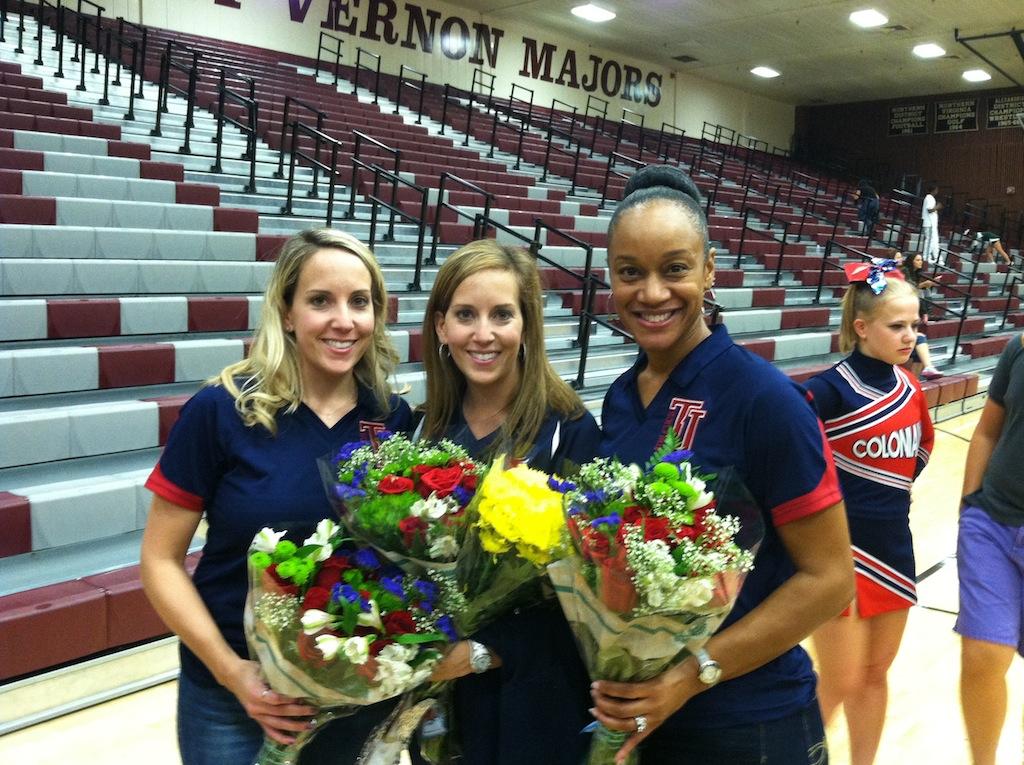 Jefferson cheer coaches Jessica Parker, Melissa Rapp and Carolyn Leary are all smiles after the results were announced at the Semifinal competition.

The Jefferson Cheerleading team competed on Oct. 16 at Mount Vernon High School for the Semi-Final Capitol Conference. Placing second out of eight teams, the cheerleading squad is pleased to have improved from their sixth-place finish the previous year.

“I’m really proud of our team. We improved so much from last year. We have much harder stunts and more tumbling,” junior Christina Zhao said. “Our routine this year is a really good one.”

In round one, the squad performed second and hit nearly all of their stunts, except for a bobble in the one-legged opening stunt and a near fall in the 360-to-prep stunt during the cheer. The Falls Church cheerleading team executed their routine without flaw, but came in third in round one due to deductions by illegal stunts.

The judges awarded Jefferson a total of 214.5 points, coming second to Marshall’s 219-point total score. Reasons for deductions for the Jefferson squad included sharpness of motions and the tightness of flyers in the air.

During round two, the Jefferson squad hit their routine perfectly, boosting their total score to 221.5 points but still placing in second. The squad was three points below the Falls Church squad, who fixed their illegal stunt to avoid further point deduction.

The Marshall statesmen took third place with a total score of 212.5 for round two, and the Wakefield warriors took fourth with 210 points.

Even though the team competed on Oct. 16, Jefferson will compete with the same teams again on Oct. 23 at Mount Vernon High School for the Capitol Conference Final Championship. The teams which place top four in the district next week will advance to the regional competition.

“We’ve been unusually ready for competition this year. We were running the routine about two or three weeks before competition so by then it was all muscle memory.” Junior Ariana Herbst said.

The cheerleading squad is hard at work in hopes of securing a spot at regionals by placing well next week. Their practices for three months have been focused on the routine.

“I wasn’t tired at all during the routine,” sophomore Aly Luckett said. “I think it was because the of the adrenaline of performing. Also at practice, we run the routine over and over so we get tired over time.”