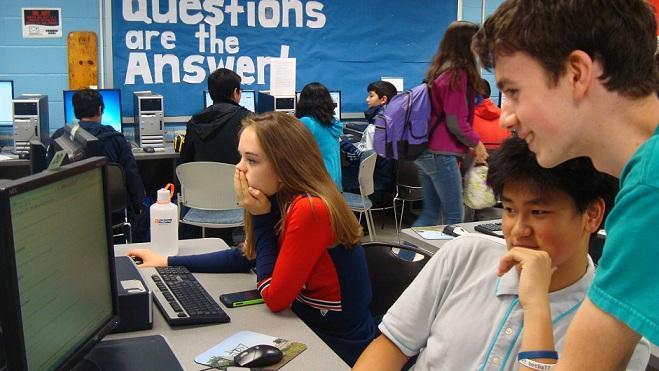 Sophomores Andy Zhao and Ryan Gottwald look through the online application portion that needs to be completed to participate in Science Olympiad.

After holding an interest meeting on Sept. 27, Jefferson’s Science Olympiad team officially opened its application process for the new school year, unveiling a more extensive and multifarious requirements for selection.

“The officers are looking for a strong-minded team that will be more organized and efficient than the past Jefferson teams,” junior John Park, the secretary and webmaster of the club, said. “We hope to set a model standard for how the team should be run in the future.”

As opposed to last year, when only an application was needed, the club now mandates the students complete an online application and parent survey form and get a teacher recommendation, as well as take a diagnostic test to be considered for membership.

The new application process will be used to evaluate the student’s behavior, devotion in science and potential for benefiting the club, factors that will greatly influence the constituents of this year’s team.

“I hope that the students gain a rare and intrinsic appreciation for science and its unsolved mysteries by participating in Science Olympiad,” Park said.

Science Olympiad is one of the most distinguished science competitions in the nation. Teams of 15 students compete in events that encourage scientific thinking and application through spectrum of scientific fields, including anatomy and water quality.

“I joined Science Olympiad when I was in fourth grade,” sophomore Abha Agrawal said. “Science Olympiad gives me the chance to learn and participate in STEM fields that interest me while maintaining a high level of teamwork.”

The team, having won the state-level competition last year, is planning on another stellar year with great results, a goal that requires great participation and responsibility from all team members.

The officers hope that the members gain genuine passion for the fields that are tested in the competition.

“Ideally, we want the team members to get involved with their events, so that we don’t have to monitor their progress,” senior Sparsh Gupta, the captain of the team, said.