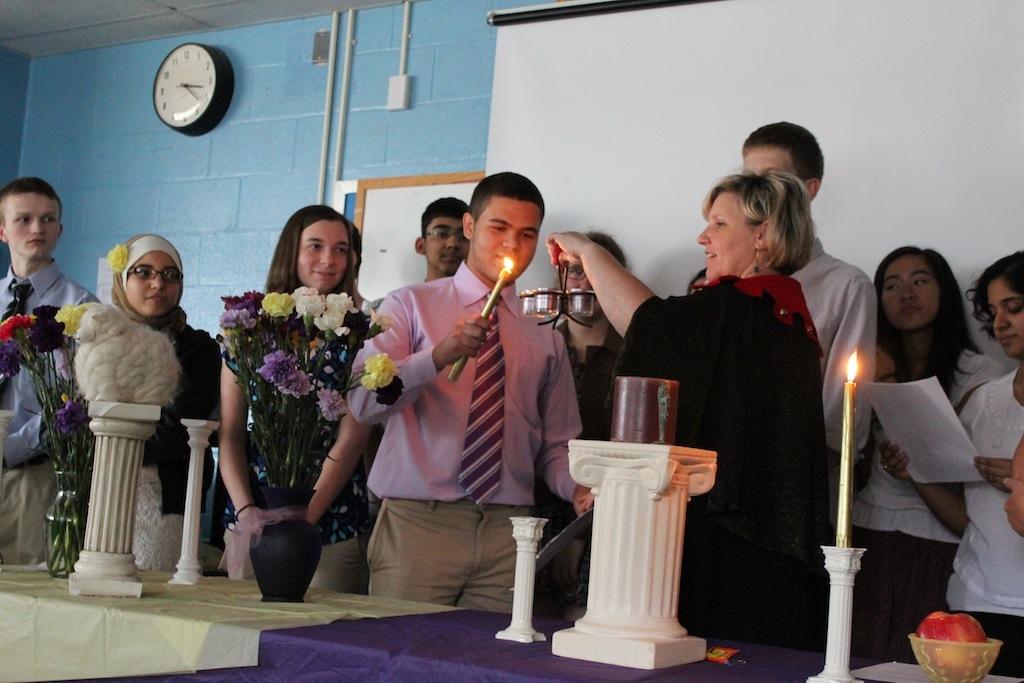 Latin Honor Society (LHS) held their annual Induction Ceremony on Oct. 10 during eighth period, in order to add new members to the Jefferson Latin community and celebrate the election of new officers.

LHS, an organization of students enrolled in the Jefferson higher-level Latin program with a GPA of a B+ or higher in the course, elects new officers each year based on the government structure of ancient Rome. Two Consuls, the equivalent of co-presidents, are elected every year, along with other positions such as Praetor Maximus, Praetor Magnus, Tribune and Censor.

Seniors Andrew Coffee and Lauren Mostrom, who have been elected as the two Consuls for the year of 2013-2014 by the members of the society, have been in the Latin Honor Society for multiple years. However, sophomore Aneesh Susarla was elected to the Censor position as a student entering LHS for the first time. Susarla has big plans for the direction he wants to take the Latin program as Censor.

“As Censor I want to increase turnout to all Latin events, by making sure they are advertised. I want to use social media as a means of communication to increase awareness,” Susarla said.

During the Induction Ceremony, Latin Teachers Patricia Lister and Christine Conklin lit the candles of each Latin level for the year, to symbolize the ignition of the student’s passion for learning the language. In order to bring the new students who were entering higher level Latin for the first time into the society, a formal code of words was said.

“Do you wish to show a desire to learn ancient languages and all about Roman and Greek writings, history, art and life?” Lister said. “We wish you to join our society. Respond if you please to our order.”

After the induction process was completed, Lister brought the students into the society with final words in Latin.

Once they had become part of LHS, new members enjoyed refreshments and discussed their plans to be involved in the Latin program for the year.

“This year I am most excited about bonding with my Latin comrades, and meeting new people in the Latin community,” Susarla said.