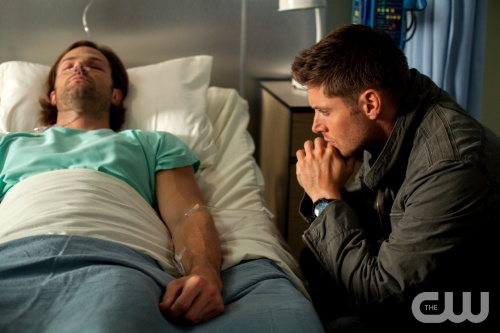 Sam Winchester in a hospital bed, with his older brother, Dean Winchester, sitting helplessly by his side. Photo courtesy of The CW's official "Supernatural" website.

After months of fans anxiously waiting to see what has become of the fallen angels and the younger Winchester brother, the ninth season of “Supernatural” has finally arrived, with a more elaborate plot than any season before. Filled from the start with the wrath of multiple angels injured in the fall and a desperate Dean Winchester (Jensen Ackles) in search of a cure for his quickly dying younger brother, Sam (Jared Padalecki), the premiere of season nine does not disappoint.

Over the past eight seasons fans have witnessed inhuman beings from all ends of the spectrum, ranging from demons to angels and every type of monster in between. Viewers have stayed with the protagonist brothers as they have literally gone to heaven and hell, saving the world from evil as they sacrifice themselves for the greater good and each other. With the eighth season ending with Castiel (Misha Collins), an angel and friend of the Winchesters, accidentally helping another evil angel named Metatron (Curtis Armstrong) to expel all angels from heaven, the Winchester brothers are sure to face their biggest battle yet in the coming season as they face both infuriated angels and malicious demons.

Aired on The CW on Oct. 8, the hour-long premiere introduced many new characters to the show and left fans with even more questions than ever before, as they wonder whether to be relieved or worried by what lies in the Winchester brothers’ futures.

While the episode begins with the brothers driving in their 1967 Chevrolet Impala just after the end of season eight, the entire scene is actually inside of Sam’s head as he is just hours away from death. In the real world, however, Sam is lying in a hospital bed as his ever-loyal brother, remains by his bedside wishing for a miracle.

The episode swiftly advances when Dean, losing all hope, goes to the chapel to pray to Castiel for help. He doesn’t know, however, that when Metatron tricked Castiel into helping him expel all angels from heaven, Metatron took his grace, making him human, and no longer able to hear Dean’s prayers. When Castiel doesn’t answer, Dean desperately, and stupidly, prays to any angels who will listen giving them his location and a plea for help. Unfortunately for him, they are all out to get him and his brother since they blame them, along with Castiel, for being expelled from heaven.

The scene in which Dean goes to the chapel to pray to angels for help was one of the most talked about moments of the show. The older Winchester brother is a character who is known for how he constantly downgrades prayers and those who believe in God, and thus has never been one to pray or ask for a miracle. The fact that he has overcome this detestation of prayer for his brother’s well being, shows that Dean was more despairing than he has ever been before. And of course the one time that Dean puts himself out there and prays for help, is the one time that his prayers aren’t answered, probably leading to an increase in his skepticism surrounding God.

A new face emerges as the angel Ezekiel, saves Dean from another angel who attempts to kill him. Vowing to help the older Winchester brother, Ezekiel collapses from his injuries, leaving Dean just as alone as before.

Meanwhile, Castiel, though a human now, has his own obstacles and enemies to face. As he witnesses the spectrum of human emotions and needs, he struggles to choose between a set of clean clothes or food that he, for the first time in his life, desperately needs. Ultimately choosing the food over the clean clothes, fans witness the loss of the overcoat, which he has donned for the past four seasons. Facing his own share of vengeful angels, the premiere shows the many obstacles and near-death experiences Castiel is sure to face in the rest of this season.

While fans were already mourning over Castiel’s loss of his angelic powers, the loss of the overcoat was probably one of the largest blows the fans experienced throughout this episode. Throughout the last four seasons, Castiel has only ever lost the overcoat when he forgets who he is, and the coat is returned to him the moment he remembers his identity. It is a symbol of his character, and the fact that he left it behind, bodes badly for the angel’s future.

The premiere comes to a close when a heartbreakingly desperate Dean overhears Sam speaking to Death, who is preparing to take Sam for the final time, as Sam made him promise there would be no coming back this time. Seeing no other alternative, Dean agrees to Ezekiel’s proposal of the angel entering Sam’s body and healing the both of them from the inside out at the same time. When Dean enters into Sam’s head to get his consent, it is the heartbreaking desperation in Dean’s voice when he tells Sam that without him, he will not be able to survive. This realization is what finally causes Sam to see sense and fight for his life.

When he wakes up in the Impala, however, a few hours later, Ezekiel has already erased his memory of the past twenty-four hours, leaving Sam completely unaware that he was only seconds away from death and that an angel now possesses him.

It was definitely refreshing to see the new, human side of Castiel, as well as the shift from the focus on hunting demons and monsters, to fighting wrathful angels. While a few angels have been revealed in the past, including Castiel, Gabriel, Lucifer and a few others, it will be interesting to see the variety of angels as well as how different the angels are now that they are no longer in heaven.

This premiere also consisted of many different storylines surrounding each of the three protagonists, contrasting sharply to the past eight seasons which only comprised of the Winchester brothers’ story arc. Throughout the episode, the show alternated between the different characters, switching storylines at strategic points that left the fans awaiting the return of that character’s story. These cliffhangers caused fans to be unable to stop the episode in the middle for they eagerly awaited the next scene of each character’s story.

This premiere has definitely left fans anxious, as all of the new plot developments are sure to come to a head in the coming season. Sam, who is now possessed by an angel and doesn’t even know it, is sure to at some point find out what Dean did to save his life. Castiel, now a real boy, is sure to face many more hardships in becoming human and understanding how to survive without his angelic powers. And Dean, well he just never learns, does he? Eight seasons have passed and he still pulls the same desperate moves he did at the end of season two.

Many questions remain in the fan’s minds as they eagerly await the next episode on Tuesday Oct. 15 that will hopefully serve to clarify some of these inquiries. Is Ezekiel really the friendly, trustworthy angel that he seems to be, or does he have an agenda of his own now that he is inside of Sam? Castiel ever reunite with the Winchester brothers in the coming episodes? And most importantly, will Sam ever find out what Dean has done to keep him alive, and what will the fallout be when he does?

Throughout all of the eight seasons, I have never been this nervous and eager for the next episode. With the strong plot pushing the story forward, and the variety of new angels that are sure to present themselves in the coming episodes, there is no telling what this season will bring to the Winchester brothers and their fallen angel.