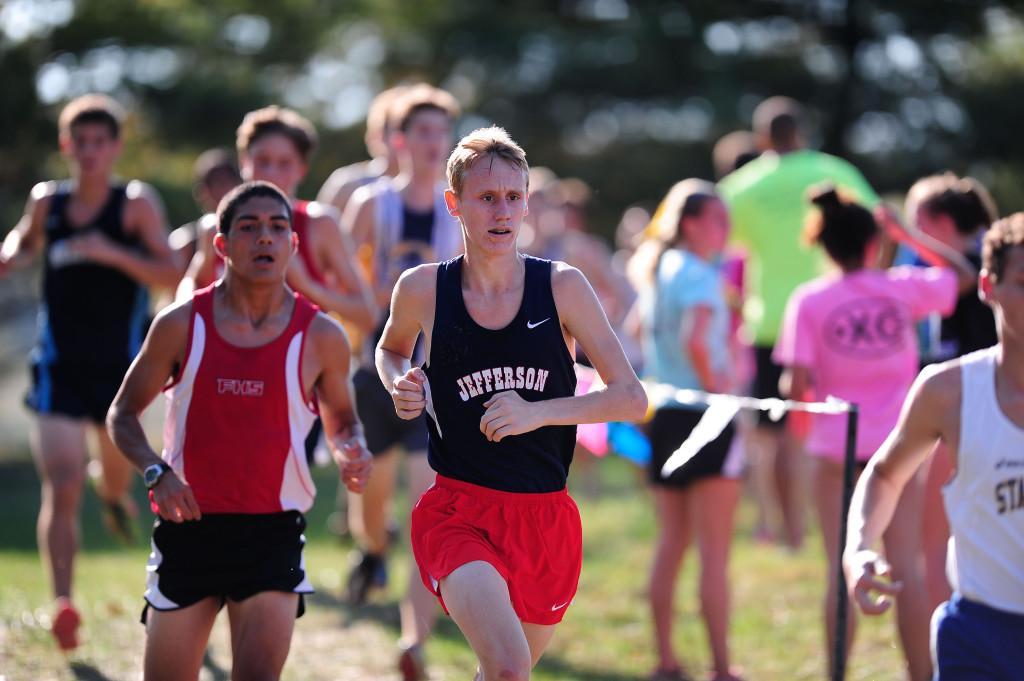 Junior Chris Blagg led the Jefferson boys in the Varsity A race.

A total of 63 schools with over 2,500 runners attended the Octoberfest Invitational, which is one of the larger meets of the season and the third leg of the Triple Crown race series. Jefferson competed in the Varsity A, JV Upperclassmen and JV Underclassmen races.

Although the performances of many athletes suffered from the oppressive temperatures, several runners were still able to score for Jefferson. The boys in the JV Underclassmen race pulled off an extraordinary performance by landing seven runners in the top 25. The boys, led by sophomore Nate Foss, narrowly edged out Ocean Lakes High School by two points to win first place as a team.

“As a team, I think it was our best race so far this season,” sophomore Jeffrey Liu, who placed 11th out of the field of 365 runners, said. “We finally were able to follow Coach’s advice on ‘pack-running’ and stuck together until the 2.5 mile mark.”

The freshmen and sophomore girls were also able to capture a remarkable second place as a team, only eight points behind McLean High School. Freshman Abigail Shoemaker had a second-place finish, while freshmen Rachel Martinka and Nikita Sawant and sophomore Phoebe Whitmore placed in the top 20.

The underclassmen are looking forward to more wins in the future, now that the runners have had time to develop race tactics and learn to work together through pack-running.

“In the future, I think as JV underclassmen, we should continue our winning form and keep on doing as well as we are now,” Liu said. “I think we have a great three years ahead of us and I think we might be serious contenders in the years to come.”

Several of the top runners were missing from the boys and girls varsity teams due to SAT testing or injuries. As a result, the varsity athletes are anticipating a strong return next weekend at the Glory Days Invitational.

“We’re looking forward to coming together as a varsity unit at Glory Days and trying to finish well as a team,” junior Chris Blagg said. “Glory Days is a fast course so we’re all looking to set personal records (PR) and pick up where we left off after Oatlands.”