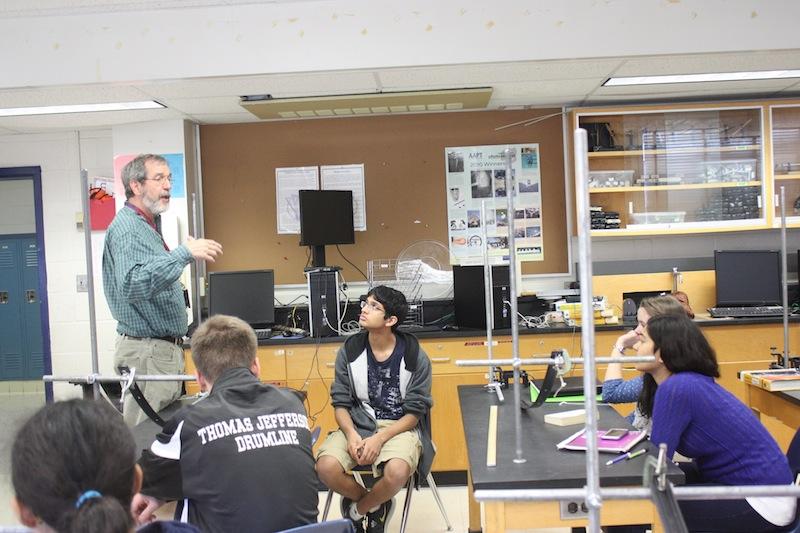 As the first month of school draws to a close, new students are no longer nervous and have grown accustomed to the unique ways of Jefferson. However, the same goes to teachers, especially those who have returned after taking an extended break from the school.

One such example is how, after teaching at South Lakes High School since 2010, physics teacher Stephen Scholla returned to Jefferson.

“I went to South Lakes High School because they had an opening in the International Baccalaureate (IB) physics program,” he said. “I live in the South Lakes community and wanted to spend some portion my teaching career teaching in my own community.”

During his time there, Scholla was surprised to learn that the curriculum was inconsistent with the proper IB syllabus. He helped restructure the program so that students would get the most out of the course.

However, once Scholla heard there was an opening at Jefferson in the physics department, he was excited to return.

“I’ve always liked Jefferson and when I heard there was an opening, I came back,” Scholla said. “I’m very happy to be teaching here again.”

“I think physics is a hard class,” Scholla said. “I hope I can help students here at any level to see the value of physics and how it plays a role in every aspect of life and how it will help them especially with developing critical thinking skills.”

Due to unique circumstances, pre-calculus and Advanced Placement (AP) statistics teacher Phil Ero had to leave Jefferson in 2011 after starting in just four years earlier in 2007.

“I never wanted to leave,” Ero said. “My wife was Executive Officer of a Coast Guard ship in Oregon, so I stayed at home to take care of our kids.”

However, once Ero was able to return to Jefferson, he was eager to continuing imparting his perception of statistics to the students.

“I want students at TJ to have the right perception of statistics, which is something more than just crunching numbers,” Ero said. “It’s the bridge between math, which is so clean and perfect, and messy, imperfect humans.”

As one of the original math teachers at Jefferson, Pat Gabriel is happy to be back after teaching from 1985 to 2012.

“When the opportunity to teach my favorite subject, BC Calculus, was offered, it was a no brainer—I wanted to come back,” Gabriel said.

While Gabriel was gone, she worked part-time for a non-profit group to support teachers in Virginia who were either starting a calculus program in their school or were new to teaching calculus. However, she still occasionally subbed at Jefferson throughout the year.

“I worked with teachers around the state last year, and though I enjoyed it, I really missed classroom interaction with students,” Gabriel said.

Now that she’s back at Jefferson, Gabriel is pleased to continue what she started 28 years ago.

“I want to do what I always wanted to do—teach calculus in such a way that the students learn as much as possible, and hopefully, enjoy it,” Gabriel said.