Marching Colonials Competes in the Bands of America Regional Championships 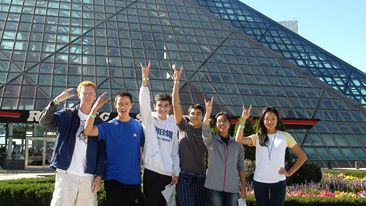 The Marching Band also visited several locations including the Rock and Roll Hall of Fame and Museum. Photo coutesy of José Acuña.

The Marching Colonials participated in the Bands of America Regional Championships held on Sept. 28, in Toledo, Ohio. The Colonials were at the 15th place out of 20 teams in the competition.

The Bands of America Championships is one of the nation’s leading competitions for marching bands. Depending on the size of school bands, teams are classified into different classes and subsequently ranked according to class. Grades are based on how well bands play the music, how well they march to it, and how difficult their musical selections are. Show concept and its general effect makes up the last scored part.

Senior José Acuña recalls that it was a rather disappointing journey, but was nevertheless a worthy experience.

“Our overall performance was unfortunately far from stellar that day. It was disappointing at first because the show was improving in quality for the past few weeks and for those seven minutes, when it counted, the quality took a serious dip,” Acuña said.

Tenth and 15th place only differed by a three-point margin, and the Colonials were very close to getting into the top 10, which compete in the finals. Acuña did not expect to win the competition, although he gauged the Colonials performance to be close to their normal standards .

“I think if our performance was close to our average, we would have either made finals, or come really close to it,” Acuña said. “We knew for sure that we weren’t going to win because we knew some schools there were national champions in the past, but we really just wanted to make finals.”

Marching Band usually competes at the USbands competitions which are fairly regional. At these, the band had tough competitions but they only rank by class, and they were able to win first place at all USBands competitions. The Marching Colonials also won State Championships for the past three years. However, for the Bands of America competition, they have only been attending for two years.

This year, the Marching Colonials have been rehearsing eight hours a week. Many practices took place during the summer rehearsals, in which the musicians practiced for around 40 hours a week for three weeks. When school started, students individually practiced at home by running through the music and visuals.

“As always I am very proud to be associated with these students – they have worked very hard leading up to this first competition and I think they have a very entertaining and demanding show on the field,” Adam Foreman, the band director of the Colonials, said. “From here we continue to clean our show and gear up for our next competition.”