Students banned from congregating in Audlob 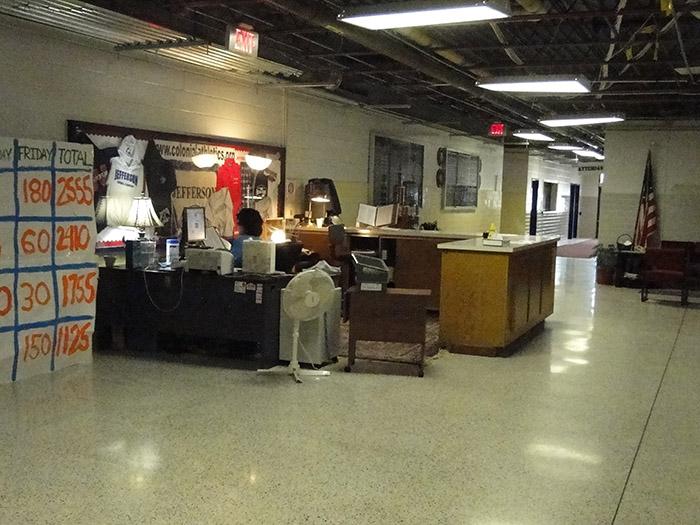 The Audlob has been converted into a main office.

The Auditorium Lobby (Audlob) has been a morning meeting place for as long as I have been at Jefferson, but that era has come to an end. With the renovation causing the front entrance of the school to be closed, the main entrance has been moved to door eight. As a result, the main office has been moved to the Audlob and students are no longer allowed to congregate there in the morning or during lunch.

It is obviously necessary to have the main office there because late students and guests need the main office right as they walk in. According to a member of the front office staff, the Audlob needs to be sectioned off in order to preserve the image of the school to parents and visitors and people who call the school.

On the other hand, the “main office” in the Audlob consists of only one desk and a side window for attendance, with the rest of the space free and open. Even if part of the Audlob needs to be restricted in order to let the staff and volunteers do their job, part of it should be open to students.

Traditionally, the AudLob has been a hangout for freshmen. On many freshmen’s first day of school, they know very few people so it is a welcome relief for them to have a place to go where other members of their class will be. This year, the freshmen were forced to find their classmates elsewhere.  Many of them are congregating in the outdoor cafeteria when the weather is good; however in general they are more dispersed throughout the school.

Although the renovations are turning a lot of things in the school upside down, there is no reason to make things harder on students than they have to be, especially the newest members of the Jefferson community, who already have to learn their way around the school and the trailers with various areas of the building being closed.

For me, the Audlob was a place to go to meet other people in my class when I came from a school that sent only a few people. Even though we have moved on, it was a great starting place to meet our new classmates. The Audlob was similarly important to people in other classes, and I hope that students will continue to be able to take advantage of it in the same way that I did.