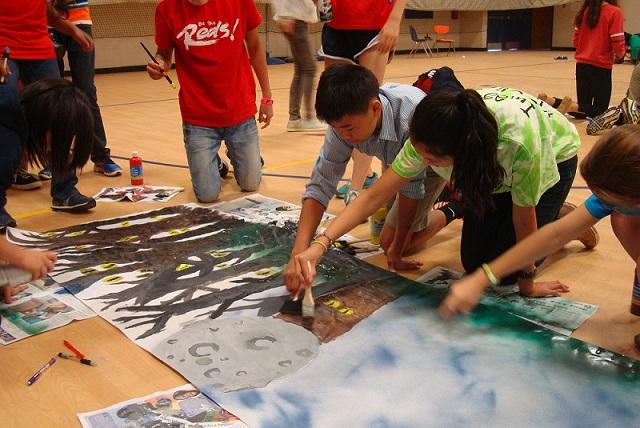 Students painted their class's banner during 8th period on Sept. 18.

On Sept. 18, students gathered at Gym 2 during eighth period to participate in painting each class’s homecoming banners, one of the many categories that determine the winning class of this year’s homecoming. In an effort to create an eye-catching banner, students used various artistic techniques and creative designs to enhance its quality.

While the freshmen class used blue and green spray paint to convey the eerie atmosphere of Michael Jackson’s classic, “Thriller,” the sophomore class painted fireworks and a giant light bulb to represent their class’s theme, “Light ‘Em Up.”

“Although our banner may have not been the best, I was really pleased with how it turned out,” freshman Suzie Bae, a member of Froshcomm, said.

With “Goldfinger”, a popular song from the James Bond series, as their theme this year, the junior class transformed their banner into a movie film about the Jefferson’s football team winning the homecoming game.

“The best part about our banner is that it looks like a movie reel with each of the five slides being a scene from a movie,” junior Anant Das said.

The senior class painted two of the most famous American landmarks, the Statue of Liberty and the Golden Gate Bridge, to convey their theme, “Born in the USA.”

For students, being in part of the banner design gave them an opportunity to cooperate with other students and produce stellar results.

“It was really nice to see our months of hard work and preparation all come together,” Bae said.

On Sept. 20, the senior class was announced as the winner of the homecoming banner competition.