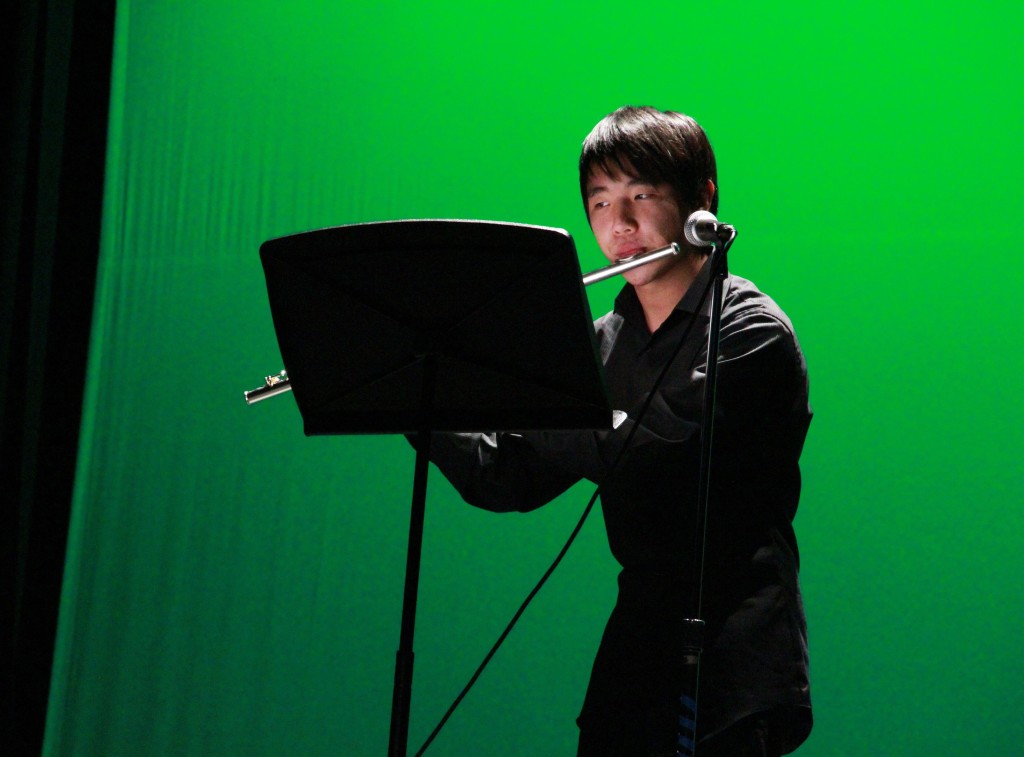 As the last notes of senior John Chae’s flute and beat-boxing solo died away, the audience rose to their feet in an overwhelming wave of applause. His unique performance left the audience in a state of astonishment and disbelief.

Chae’s performance was just one of the outstanding acts at Jefferson’s Talent Show on Feb. 10. There were a total of 19 acts that ranged from mash-ups of popular songs and thrilling dance choreography, to instrumental tunes and stunning poi performances. The acts were judged by a panel of faculty members, with Manchoir coming in third place, the band Panel of Experts taking second, and the impressive “fluteboxing” performance by Chae taking first.

The masters of ceremonies, seniors Tom Hillenbrand and Doug Hearney, topped off the night with hilariously corny jokes and semi-intelligent musings. “Since I lack a performable talent, it was fun to finally get to be a part of the show,” Hillenbrand said.

Most of the acts required a lot of preparation. Many of the group performers got together during several lunches and eighth period blocks to rehearse. Swing dance was one of the larger performing troupes, and their intricate choreography required additional preparation.

“Some couples opted for extra practice on their own as the talent show drew nearer,” said junior Amanda Hicks. “We learned all our aerials on gymnastics mats first before doing them in run-throughs of the routine.”

One of the most memorable and creative performances of the night was a flash back to the Class of 2012’s freshman lock-in talent show. The Soul Tops, a group of friends from the football team, reunited to perform their impromptu, old R&B medley.

Regarding his Barry White solo, Williams just thought it would be a hilarious addition to their performance.

“I had to really convince my group members that it was a good idea, but they came around when they realized just what a funny concept it was.” Williams said. “I’m the most socially inept kid you’ll ever meet; on my few attempts in life to flirt with attractive girls, I have ended up choking on my own spit and failing to form coherent sentences. Barry White-style love-crooning is the last thing that people would expect from me.”

The Panel of Experts rendition of Walk Off the Earth’s cover of Gotye’s “Somebody that I used to know” was also a crowd pleaser act. Senior Reece Anderson was invited to be a guest. According to Anderson, the band members told him, “Reece, you should be in our act for the talent show! All you’ll have to do is stand there and look tough!”

“When the Panel of Experts asks you to do anything, you say yes,” added Anderson. He was a comically serious addition to the band’s stellar performance.

Although some participants expressed disappointment over “less-than-satisfactory” performances, it was hardly visible to the audience. “Every performance can always be improved, but I feel we did our best,” said senior Rishi Malhotra, a soloist from Manchoir’s cover of “Crazy” by Gnarls Barkley.

When it was announced by the judges that Chae was the first place finisher, he was surprised. “I didn’t feel too great right after my act because I messed up a few times, so I was surprised when I found out that I won.”