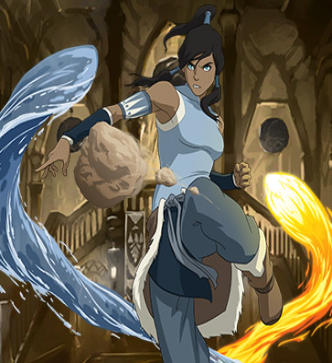 After left hanging with questions for more than a year, fans are now able to rejoice in the arrival of their favorite benders. “The Legend of Korra” has returned and it’s better than ever before. With an enthralling storyline, nuanced and rich characters and incredibly cool action scenes, “Korra” certainly does not disappoint with the premiere of its second season, “Book Two: Spirits.”

Created by Michael Dante DiMartino and Bryan Konietzko, “Korra” was originally slated to be a stand-alone following the critically acclaimed, “Avatar: The Last Airbender.” However, due to the immense praise after the first season, the show has been extended to consist of four seasons.

Aired on Nickelodeon on Sept. 13, the hour-long premiere consisted of two consecutive nail-bitingly intense episodes, which began with a short montage of how the characters fared during the six months between the two seasons. A new president was elected after the fall of Amon and his revolutionary group, as protagonist and Avatar Korra continues to master air-bending under Tenzin’s prowess. In addition, boyfriend Mako works as a police officer while his brother, Bolin, attempts in vain to train the new members of his pro-bending team and Asami struggles to revive her father’s fallen company, Future Industries.

Despite peace being brought to Republic City, danger looms as angry spirits begin to attack the Southern Water Tribe.

The episode quickly progresses to establish the overarching storyline of Book Two– the clash between the Sprit World and the human world as the sanctity of spirituality and tradition is threatened by the increasingly secular and materialistic world. Although the first season tackled physical issues, such as the conflict between benders and non-benders, the second season digs deeper into spiritual conflicts.

The tension is palpable in these first two episodes as Korra’s uncle, Unalaq, Chief of the Northern and Southern Water Tribes, who seems to be the prominent antagonist, and her father, Tonraq, collide and set up the main conflict, intertwining the characters in the struggle. Despite the dramatic and darker scenes in the show, silly characters such as Bolin and Tenzin’s children and family provide comic relief and good-natured fun, which is what makes “Korra” so successful.

Backing up the riveting storyline is the enhanced animation that is the result of the show’s move to a different animation studio in Japan. “Korra” now has crisper movements, especially in the impressive columns of fire and oceans of waters thrown at viewers. In fact, there’s even a subtle reference to Eadweard Muybridge’s moving images of a galloping horse, which fits perfectly with the advent of technology in 1920’s motif of “Korra.”

It is also refreshing to see the cracks in Korra and Mako’s relationship, showing the depth and insecurities of both characters after that big kiss in the first season finale, as well as the internal crises Korra faces as the Avatar. Without being fully in tune with the Spirit World like Aang, her predecessor, is she confident enough to be that bridge between humans and spirits? I’m interested to see how this season’s journey will help her with the spiritual aspects and grow as the Avatar—but also as a young woman.

Although there are flaws, such as some trite and stiff lines spoken by Unalaq that could be replaced with less stereotypically villainous lines or the occasional cringe-worthy piece of slapstick humor, the tight-knit story and wonderfully complex characters dwarf these shortcomings.

Never have I been so excited with the premiere of the second season. With a strong female protagonist who predominantly leads the show, the show has always managed to capture my attention. Despite being targeted to a young audience, “Korra” rivets the older audience to the screen with its complexities and issues that translate into the real world.