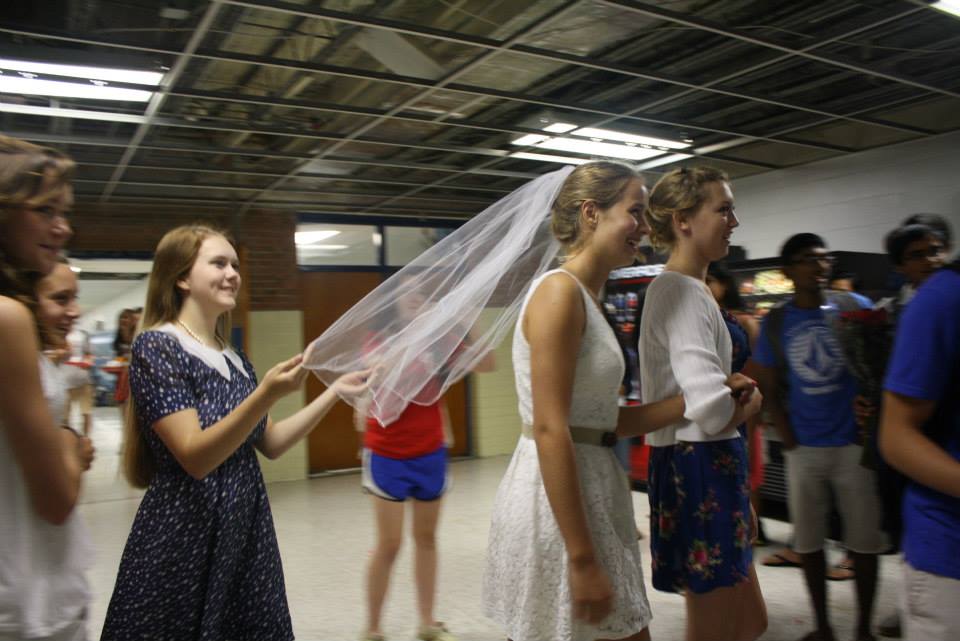 Junior Sophie Bennett is led by juniors Annie Thomas and Caroline Culberson down the aisle.

Dozens of spectators parted down the middle as a live orchestra played Johann Pachelbel’s “Canon in D,” as streamers and a path of red paper led juniors Taylor Quinn and Sophie Bennett to the front of the J-Lounge, where they would partake in a ceremony of holy matrimony.

Such was the scene at the elaborate homecoming asking planned by juniors Tommy Rogers and Jack Morris, who had been planning the event for almost two weeks before.

“I honestly can’t even remember thinking up the idea, I might have overheard my sister watching TLC in the other room,” Rogers said. “At the end of the day, I’m just happy that it all worked out and we made some girls feel special!”

Bennett and Quinn were told to wear white to the asking, although they weren’t told exactly what it was. However, many Jefferson students were informed of the asking through a Facebook event, which said to dress formally.

“Once Annie Thomas began escorting me down the aisle and Caroline Culberson gave me my veil, all the pieces came together,” Bennett said. “I would’ve said yes to any asking, but I will watch the clip of our ‘wedding’ in 20 years and laugh myself to tears—I’ll never forget Andrew Seliskar’s readings from ‘Fifty Shades of Grey’ or being proposed to with a ring pop.”

Though the freshman class only had four days of school before Asking Week began, many of them were able to plan out detailed askings. Freshman Chris Cao asked his date by making a heart shape out of several balloons and getting down on one knee as his friend played the violin.

“My friend and I brainstormed for ideas for our askings, and my date told me it was really sweet and nice,” Cao said. “I think a bigger asking is ideal for an asking if the guy definitely knows that the girl will say yes.”

At Jefferson, it has become a tradition for boys to plan large-scale homecoming askings, and are often helped by their friends, who will often lead the girl to a certain destination or accompany the boy by singing, dancing, or even dressing up as Uruk-hai.

Senior Robert Young came up with the idea of a Lord of the Rings-themed asking for senior Meghana Valluri, who was taken on a quest featuring many of their friends as different characters, from Gimli to Gandalf.

“It was surprising and funny to see all of my friends dressed up as characters, I had so much fun and I don’t think I’ve laughed that much in a very long time,” Valluri said. “I can only imagine how much work it must’ve taken to put my asking together this year, so I’m really thankful.”

This year, to increase attendance, many Facebook events were put up to advertise certain askings. It also helped prevent major, large-scale askings from being at the same time.

Sophomore Andrew Howard created a Facebook event for his asking for sophomore Rachel Vasta, where he performed a song and dance with his friends to Ne-Yo’s “One in a Million.”

“I know how much Rachel loves that song, and I wanted it to be special for her,” Howard said. “The best asking is the one that is the most thoughtful; all that matters is the thought that went into it.”