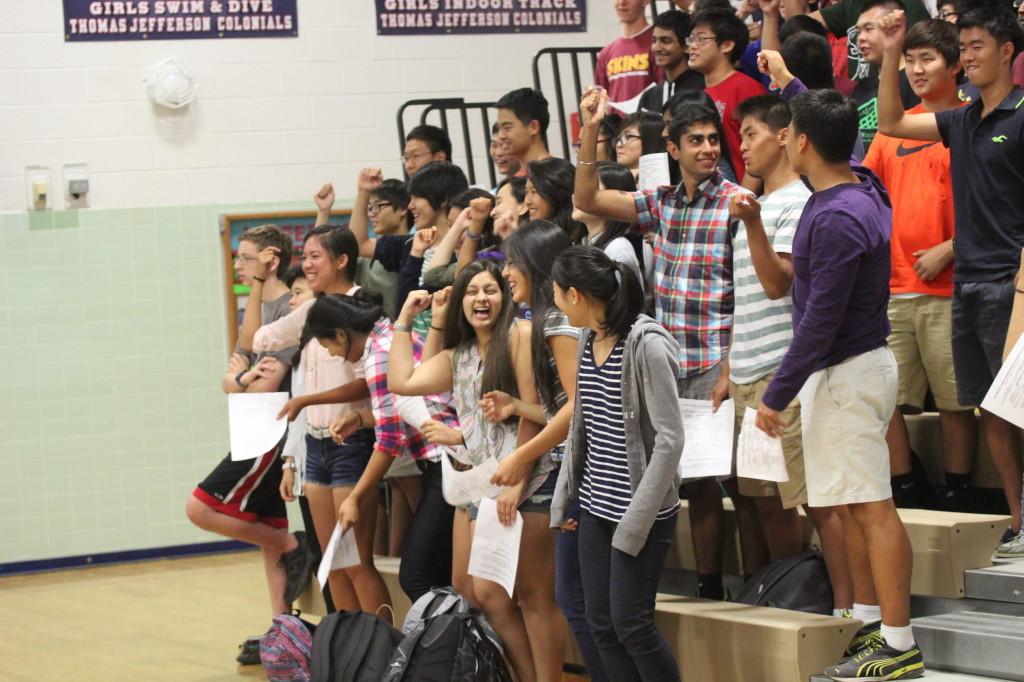 Juniors practice their cheer on the bleachers in Gym 2 at the Homecoming class meeting.

The annual Homecoming class meeting was held on Sept. 9, where each class council had an opportunity to meet with the entire grade during the eighth period block. Homecoming week starts on Sept. 16—less than a week later.

“At the meeting, we discussed the different aspects of Homecoming, activities and participation during Homecoming week,” sophomore Kaila Stein, class council senator, said.

The class councils knew it was imperative to have everyone on the same page. They spent the meeting practicing each cheer for the pep rallies during the breaks and providing announcements about important class activities, such as the canned food drive and money wars.

“We hoped to put more spirit in our new students, and remove the intimidation or fear they may have had coming into TJ,” freshman Suzie Bae, who is one of the committee members of Froshcomm, said. “We additionally wanted those who weren’t informed to be informed, so that they could get more involved with one of TJ’s biggest traditions.”

For the juniors, the meeting did not go as smoothly as the council originally planned.

“I think audio was a real issue. It was a large gym, and the microphones weren’t working very well. On top of that, a student tripped over the speakers so I think that might have messed them up a bit,” junior Anant Das, the class council president, said. “In the future we’ll probably just shout loudly, though I think it was super helpful that everything we said was on a flyer that we handed out.”

The senior class, on the other hand, prepared to have a successful last Homecoming week by not only going over goals but also starting a bulletin board in the Senior Lounge to keep information organized.

“Given that it’s senior year and the fact that we only have a little less than a week, it’s our last chance to really put our work out there and get pumped about it,” senior Tarun Prabhala, who is treasurer of his class, said. “At the end of the day, we just want to be able to bring out the class’s school spirit and see that they enjoy their last Homecoming with as much exuberance and patriotism as possible.”