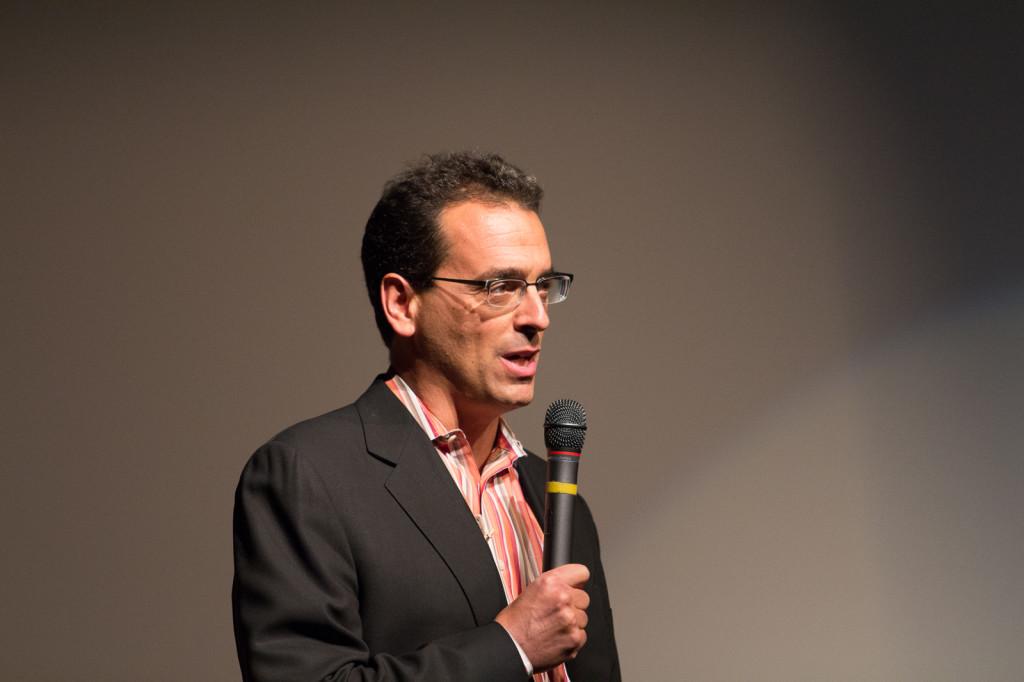 Pink spoke in the Auditorium on Sept. 6. Photo courtesy of senior Will Ashe.

The auditorium filled quickly with a cacophony of chatter as students scrambled to find their friends. As everyone found seats, the noise died down, and both those in the room and those watching the event over a live camera feed keyed in on the speaker standing on the stage.

On Sept. 6, bestselling author Daniel Pink came to Jefferson to talk about techniques to promote creative thought. Pink’s most recent novel, “Drive” is the One Book for the 2013-2014 school year.

“It was nice to hear more about what the author was talking about in the book,” junior Sumved Ravi said. “It clarified the points he was trying to get across and made the experience of reading better.”

After a brief introduction by senior Joey Valery, Pink dove straight into the material, emphasizing three points—brevity, levity and repetition—which he promised were his aims for the afternoon.

One of the key creativity-enhancing techniques Pink recommended was the idea of setting aside time for experimentation. Not at home, or after work, but a standard session in which you have the freedom to explore whatever ideas come to your mind.

“I think that the eighth period block is a very good solution for an innovative block of time,” senior Linda Lay said. “The research labs are another example. Students can pursue any sort of research project they want.”

Pink’s discussion of such sequesters led to topics such as the Ig Noble Prize, an award given out to achievements that as it describes, provokes both laughter and thought, and the research done by physicists Andre Geim and Konstantin Novoselov.

Additionally, Pink’s speech prompted many student responses during the Question and Answer session at the end of the block. One question was from senior Jordan Goodson, who inquired about Pink’s views on the current grading system used by public schools.

Pink’s visit was the first event of the year that focused on the One Question and One Book, kick-starting many such forums that examine the crossroads between productivity and creativity.

“It seemed irrelevant to the main topics of the scientific world at first, but when I thought about it, the process of coming up with an idea is what made it so cool,” Ravi said.