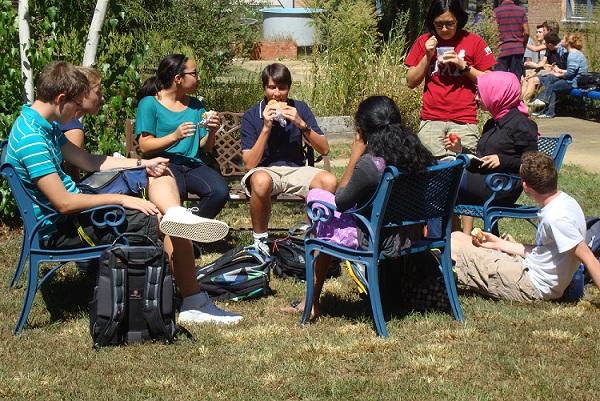 Students can eat at the café while sitting on chairs or benches.

Under the light afternoon sunlight, the courtyard brightened with life and vigor as students gleefully conversed with their peers and munched on their food.  This vibrant setting is, surprisingly, one of the more positive results of the newly begun renovation.

As the renovation officially starts at Jefferson during the 2013-2014 school year, it has already affected more than just the classrooms. Now, various lunchtime venues that used to be popular for student gatherings are restricted from use.

As a result, new areas have opened for students to enjoy their lunchtime, a short respite that students relish before shuffling back to classes. Starting this year, students now have the privilege to eat in gym 2, the courtyard and rooms 204 and 205.

Junior Carolina Hatanpää, who used to eat lunch in front of the school building, expressed her satisfaction with the new Outdoor Café located at the courtyard.

“The café is great. I think it’s nice that the place is outside and has many benches,” Hatanpää said.

Freshman Won Seok Song mentioned that he especially liked the spaciousness of the room, allowing him to have a place to eat without having to wander around.

However, some students, such as sophomore Ana Driscoll, chose not to eat at the newly introduced venues and found their own places of comfort.

“I thought the new lunch spots were rather crowded, so I decided to go to a place that was quieter,” Driscoll said.

Nevertheless, the new lunch spots will be acting as perfect places for relaxation and rest to numerous students as Jefferson completes its renovation.