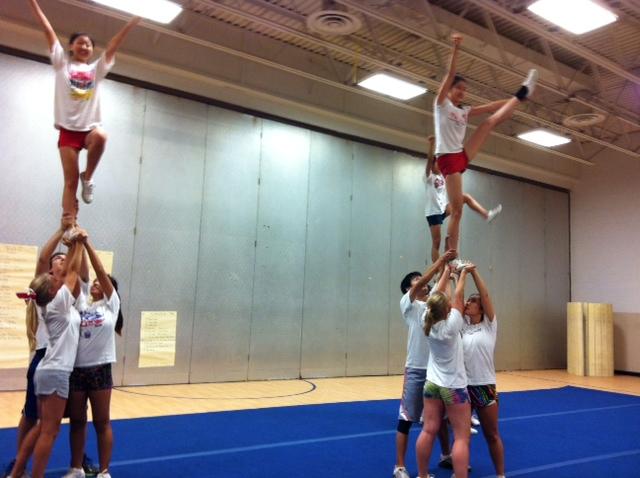 Varsity cheer has already been practicing for several weeks to prepare for districts.

Varsity cheerleading is preparing a routine of higher difficulty as they train for semifinals on Oct. 15 in a new district. Not only does the new district have a fresh set of competitors, but last year’s top high school cheerleading teams from the area have been moved into a different bracket.

Because of the change in district, team member’s hopes of advancing to district final and regional competitions run high. In the past, the district included higher level teams such as Stonebridge and Fairfax high schools.

“In the past, we’d always go in knowing which teams would take first and second,” senior Sarah Shan, one of three varsity captains, said. “But now we’re in uncharted territory and it’s exciting to not know for once.”

The varsity cheer team currently has 16 girls and five boys, the highest turnout of male cheerleaders since before 2010.

“With a larger squad, we can have a louder and peppier sideline team, as well as a more creative competition routine,” senior Yana Kaplun, another varsity captain, said. “The boys add so much strength to our stunts, variety to our dancing, and enthusiasm to the atmosphere at practice.”

This season, the varsity cheer team has been preparing the new routine since day one. Just days after tryouts, team members attended advanced stunting and choreography camps in order to maximize the practicing time the team has before semifinals in mid-October.

These camps have prepared the varsity squad with the techniques they need to impress the judges with higher level stunts during competition.

“Stunting is our strongest aspect this year. We’ve learned a lot of new stunts at the stunt clinic this year and we’re looking better at the beginning of this season than of the last two seasons.” Shan said.

Jefferson cheerleading new district will include a different set of high schools including Stuart, Marshall and Mt. Vernon. District semifinals will be held at Mt. Vernon High School on Oct. 15, and district finals at the same location on Oct. 22.