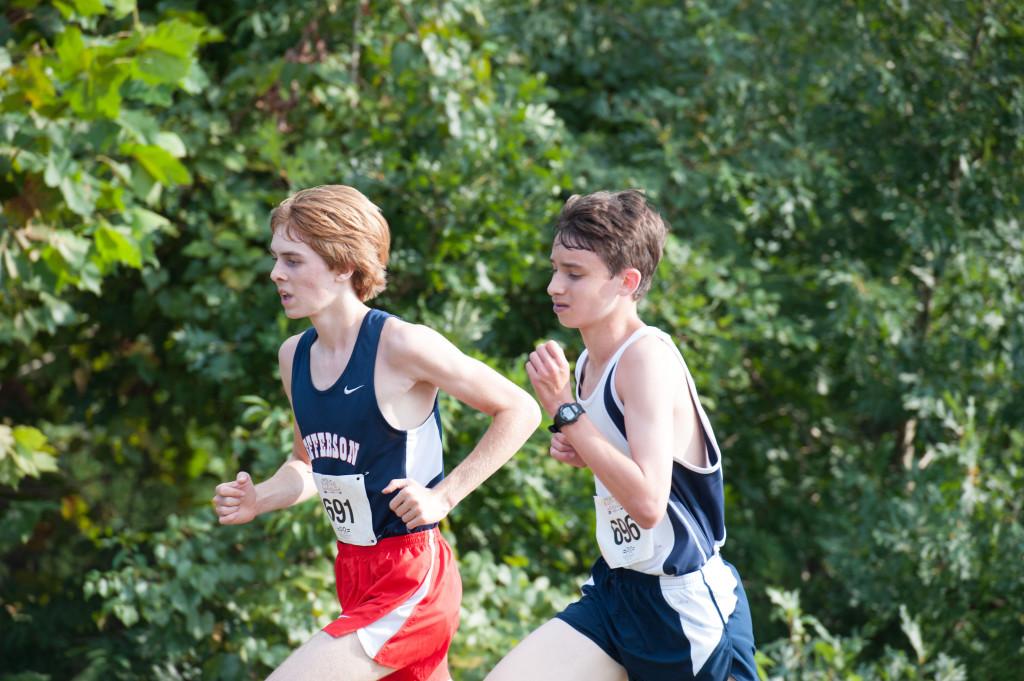 At the PR Kickoff Invitational, sophomores Nate Foss and Eli Lifland pace each other during the sophomore boys race.

As the month of August winds down, the pack of runners pounding the pavement has become a familiar sight around Jefferson. Months of grueling summer training are about to pay off as Jefferson’s cross country athletes ready themselves for the upcoming season.

Although official summer practices did not begin until Aug. 5, athletes began training for the fall season almost immediately after the school year ended. Throughout the summer, rising seniors held captain’s practices to build team spirit and recruit new runners.

This year, however, change is in the air for the cross country team. This is mainly due to Jefferson’s transfer to a new district, in which new schools will replace Jefferson’s old rivals.

“We’re competing against smaller schools, so we don’t have to deal with the powerhouses that have a huge advantage on us,” senior Carrie Murton, a captain on the girls team, said. “We also have a lot of new freshmen coming in, and there is a lot of exciting talent there.”

After initial time trials were held in early August, the team competed in a scrimmage against Woodson High School on Aug. 22. Several Jefferson athletes had strong performances on the 2.98 mile course, with senior Jamie Simon and junior Haley Stumvoll capturing first place in the boys and girls races, respectively.

The boys and girls teams are training hard to capture a win at the district meet in October. Head Coach Jeff James has high hopes for both teams and anticipates a strong showing in the championship season.

“My goal is always to try to win districts, make it to the state meet, and hopefully get onto the podium and be one of the top teams,” James said. “Competing against teams that are the same size now will make a huge difference.”

On the girls team, six of the seven members from last year’s varsity squad are returning, while this year’s boys varsity team will showcase a strong group of rising seniors.

“Because a bunch of the guys on varsity have run together for four years, we’ve built a really strong bond that you can only gain from innumerable experiences together,” Simon, a captain on the boys team, said. “Everyone has been putting in the summer running and done their part to make this year successful, so we’ll be able to put our abilities to the test.”

The first meet of the season will be the PR Kickoff Invitational, a two mile race held at Bull Run Regional Park on Aug. 29, followed by the Monroe Parker Invitational on Sept. 7.