BigSibs welcome the class of 2017 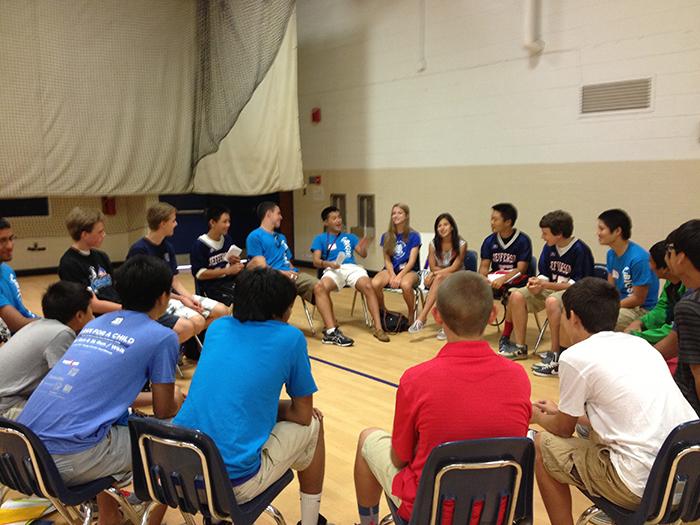 BigSibs and LittleSibs sit in a circle in Gym 2 as they play icebreaker games.

On Aug. 29, the gyms were overflowing with groups of students sitting in circles as they waited for the annual BigSib Orientation to begin. Each year, the BigSib program matches incoming freshmen with upperclassmen volunteers to help them adjust to Jefferson.

“The group wasn’t too talkative at first, but by the end of the day it seemed like new friendships were sprouting all around me,” senior and team leader Yana Kaplun said.

A newer feature of the BigSib program that became more advertised last spring was the ability to request your sibling for the upcoming year. However, most students are still matched up by common interests and geographic location.

“I talked with my LittleSibs about what they were interested in this year, and participated in the name games we played,” senior Will Ashe said. “I also tried to give them other helpful hints that they hadn’t thought of.”

The BigSib activities took place after the regular freshman orientation. After the freshmen were directed into the gyms, they spent the rest of the day participating in games, a scavenger hunt and a tour of Jefferson.

“The Bigsibs portion was cut down to two hours, so we took out some major activities like the field day,” senior Care Shoaibi, a BigSib coordinator, said. “The tour is the most crucial part for freshmen and we had gotten requests to extend that part.”

Although some of the incoming freshmen know students at Jefferson, for many, BigSib Orientation is the first time they meet anyone from the school.

“Lots of people were very helpful. Learning all the little tips and tricks about the school was interesting,” freshman Nam Tran Nguyen said.

The BigSib program will continue to help the class of 2017 in their transition to high school throughout the school year through scheduled interactive activities.

“Through the BigSib program, I have made some really great underclassman friends,” Kaplun said. “I feel like BigSibs connect the TJ student body in a way that not even our eighth period activities can.”