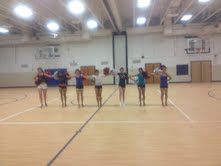 As the school year and football season draw near, the varsity dance team is hard at work on their routines for the football halftime shows. The team started practices on Aug. 13 and has continued to hold weekly practices since then. They will perform at football games and basketball games during halftime as well as three competitions this winter.

The team has changed its approach since last year in the hopes of bettering its chances at competitions. They are narrowing the focus of their dances, choosing only two of the four styles typically used by dance teams.

“This year we are focusing on choreography that fits the skills of the current members as opposed to ones too difficult or easy so that they can perfect and perform the dances well,” Melissa Weber, the coach of the Varsity Dance Team, said.

The team has already choreographed the routines for football games during the summer and will later move onto their competition routines.

“Not as many people come to summer practices because of vacation, so it’s easier to learn less technical routines, but once we get close to competition season we will probably perform competition routines at basketball games to get some experience,” senior Wendy Guo, a team captain, said.

“When performing to an audience, we want to entertain them with upbeat music and simpler routines, but at the competitions when we want to impress the judges we want more technique,” Weber said.

Another change from last year is the addition of more student-choreography. This year, the students will choreograph most of the routines for games and even some for competition. Most of the choreography will be completed by the captains: Guo, senior Christin Park and junior Lindsay Williams.

“I want the students to choreograph so that they can take more ownership of the team and learn from the positive and negative experiences of management,” Weber said. “It’s more fun when the students are involved.”