Seo receives Cappie for Best Comic Actress in a Play 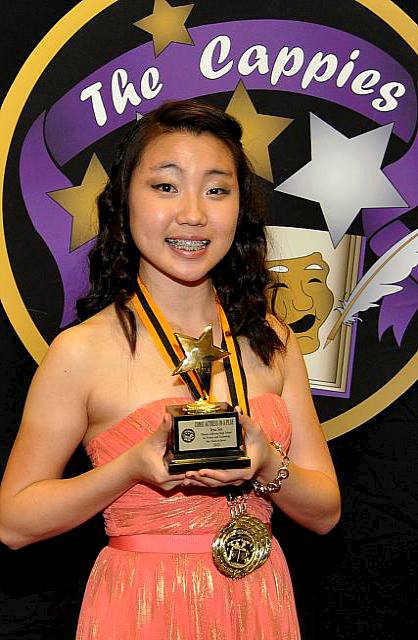 Junior Yena Seo receives a trophy for winning the Comic Actress in a Play award at this year's Cappies Gala.

Dressed in formal attire and proudly sporting nomination medals, TJ Drama was acknowledged for their critics and performers at the 14th annual Cappies Gala, held at the John F. Kennedy Center for the Performing Arts in Washington, D.C., on June 9. The gala is the award ceremony for participants in the National Capital Area Cappies program, which honors journalists, techs and actors in high school theater. This year, 56 schools participated in the program, with over 2400 people in attendance at the gala and more than 200 nominated students.

In that group of anxious nominees was junior Yena Seo, who later received the Cappie for Comic Actress in a Play for the role of Marilyn in TJ Drama’s spring show, “Don’t Count on Forever.”

“I was very surprised when they announced my name as the winner and very humbled because I knew that there were many talented girls in my category,” Seo said. “It was a true honor to be able to represent the school and TJ Drama.”

This year, the drama program had also been nominated in four other categories.

“This year our school did really well in Cappies, receiving six total nominations and one win,” junior Ben Andre said. “It is also the first time since 1999-2000 that our Cappies critic team received a nomination, so that was really cool.”

Acting and tech nominations are given to the top five people or ensembles in each category and are chosen by hundreds of student critics through a complex voting system consisting of evaluation scores, nomination points and award points, which was designed by two Jefferson students in 2003. Critic nominations and awards, also given to the top five in each category, are selected based on the number of shows reviewed and the number of reviews selected for publication.

The critic team, comprised of senior Tahmina Achekzai and juniors Andre, Chris Doan, Jordan Goodson, Sib Shewit and Seo, had been nominated. Goodson and Seo had also both been nominated for the Returning Critic award, which honors critics in their junior year.

“I was glad we could prove to our community that even though we are a science and technology school, we have a lot of talented performers,” Seo said.

Many of the performers who were not nominated nevertheless attended the gala to support their fellow cast members.

“Seeing everyone get the chance to perform on the stage of the Kennedy Center was awesome,” sophomore Kira Becker said. “I think it’d be really great to get that opportunity next year. It inspired me to work harder.”

“I was super happy and excited,” Carrington said. “I put a lot of effort into the show and my role. It’s a nice feeling to have been rewarded with a nomination.”