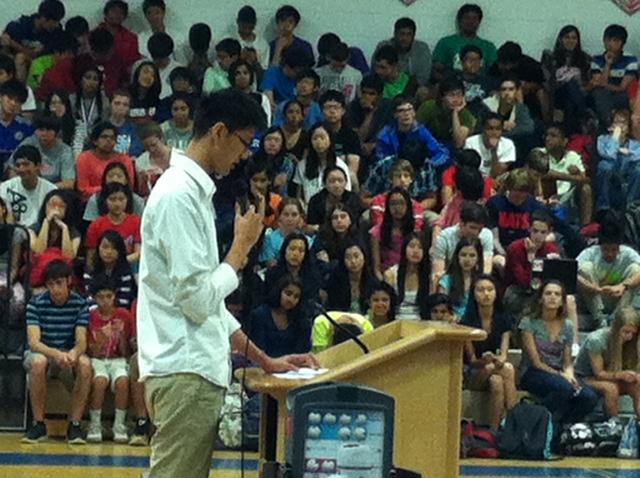 The Class of 2016 hoarded into the near side of the main gym during eighth period on June 3, to listen to the campaign speeches for positions on the 2013-2014 Class Council.

Each with a different joke or slogan which rhymed to their name, freshmen candidates gave their speeches specifically for senator, historian, treasurer, secretary and president positions, talking about how their passion and commitment would help next year be a great one.

For the senator position, candidates Aly Luckett, Sahaj Sarda, and Kayla Stein emphasized their time management and communication skills necessary for the job.

The historian position required the elected SCA member to take pictures of the class over the year and compile them into a class photo album. Candidates include Vikram Gupta, Jake Cui, Chris Hoang, Christina Wei and Irene Song.

“It’s pretty cool that it might be me representing all of my friends and peers for the next school year, and making a lot of major decisions,” Gupta said.

Running for treasurer, freshman Jeewoo Kim hopes to create an expandable budget if elected, as well as hold frequent fundraisers and represent everyone in the class while making monetary decisions.

If elected, candidate for Secretary Kavya Ravikanti hopes to create a class website  and have regular movie nights exclusively to the class of 2016.

“Your friends will vote for you, but you’re trying to pick up on those votes for undecided people, which you will only do if you convey a strong speech,” candidate for treasurer Matt Huo said, “There’s a lot of self-exerted pressure.”

Polls will close June 7 at lunch, and a full list of candidates can be found for freshmen on Iodine.