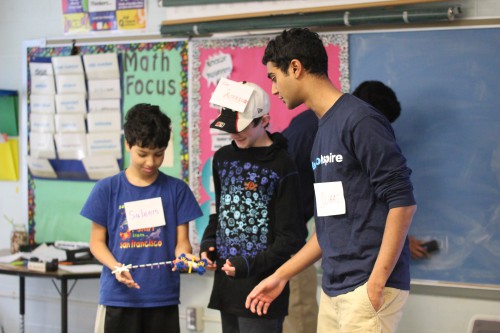 “What’s a humane way to kill a chicken?” senior Sid Sivakumar asked a class of eager faces on May 10. Immediately, enthusiastic answers were bouncing off the walls of the classroom, such as yanking a chicken’s head through the narrow end of a cone or snapping its neck.

Instead of correctly answering the question, Sivakumar turned to a video of the famous Tacoma Narrows Bridge in the state of Washington to help explain a phenomenon in physics that can also be used to kill chickens through frequencies rather than physical contact. A chorus of “whoa” was heard as the students of Longfellow Middle School were in awe, watching the video with wide eyes.

Sivakumar, along with seniors Suhas Gondi and Nathan Kodama, is a founder of NeuroInspire, an outreach program that targets elementary and middle school students to help develop a passion in the science, technology, engineering, and mathematics (STEM) curriculum.

“We aim to use the highly multidisciplinary field of neuroscience as a means of inspiring young, aspiring students to learn more about STEM, hopefully helping to address this pressing issue,” Gondi said.

Unlike other outreach programs that aim to tutor younger students, NeuroInspire is based on discussions and demos. Rather than listening to lectures or studying one-on-one with a mentor, students are free to give input in a large class discussion without needing to raise their hands.

“It is very difficult to create an effective outreach program that teaches students subjects based in STEM,” Kodama said. “You aren’t helping a student if you’re just giving them a math worksheet.”

The founders of NeuroInspire began the program several months ago when they wanted to motivate students in the field of neuroscience, but also incorporate an aspect of fun. In fact, Kodama and Sivakumar ended up pulling three consecutive all-nighters in preparation.

“During the program, everything is just as fun for us as it is for the kids,” Kodama said.

Currently, NeuroInspire is working its program at Kent Garden Elementary School as well as Longfellow and Kilmer middle schools. However, they plan on expanding to underachieving schools that are on the Priority Schools Initiative (PSI) list.

“I was shocked there was such a learning gap right under our noses,” Kodama said. “Some of these schools are less than three miles away from TJ.”

However, there are some difficulties that posed a problem when setting up programs, such as the high expense necessary for certain supplies like an electroencephalography (EEG) machine or electromyography (EMG) kits. In addition, there is difficulty in determining how much knowledge students already have with neuroscience, especially when some have a background in biology and chemistry.

“We always find the students are smarter than we had expected,” Kodama said.

The three graduating seniors believe their program will continue next year.

“We have students from every year at TJ involved as instructors or administrators, and we are confident that the organization will continue to grow and thrive next year after we leave TJ,” Gondi said. “We are also currently hypothesizing if and how we could start NeuroInspire programs near our college campuses.”